Death in the Med : follow up on the Panorama show 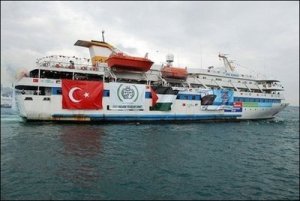 Says Rifat : I called the BBC today and registered an official complaint and had them open a case # for it. I was on the phone with them for quite some time and let them know many points and that I was on the ship when we were attacked as well. I then followed this up with a written complaint on the forms on their website, and also submitted it to the blog page. FYI, my follow-up written comments are below

“I was on the Mavi Marmara ship when we were brutally and illegally attacked by the Israeli military in international waters. The episode of Panorama: “Death on the Med” was nothing more than a disgusting piece of Israeli propaganda to put it very mildly. At 2:20 into the show, Jane Corbin states quite bluntly “We got hold of new Israeli military video of the operation”. Yes, that’s exactly it; ISRAELI MILITARY VIDEO. So the only question is, was Jane Corbin in particular and the BBC in general a willing puppet and mouthpiece of the Israeli military or were they just duped into it?? And which of these two possibilities is worse, I’m not even sure.

The program referred to “thousands of rockets” being fired from Gaza into Israel but of course fails to mention the bombardment of Gaza with banned white phosphorous and other weapons that killed over 1400 civilians.

The program and its producers which can undoubtedly only have an agenda, did not question the Israeli spokespeople on why they confiscated all of our footage and tapes if they have nothing to hide. On the contrary, Panorama went ahead and appallingly used doctored tapes given to them by the Israeli military, and presented these as fact.

Why didn’t Panorama mention any of the other ships in the flotilla, or mention that citizens from over 40 countries and various religions (including Jews, Christians and even atheists) and ethnicities participated in it and that many organizations collaborated with IHH on this flotilla? Instead, Panorama was despicably trying to play on people’s fears due to their ignorance of Islam and portray this flotilla as being driven by extreme “Islamists”. There were many British citizens aboard the ship as well, but for some strange reason, Panorama opted not to show a single one of them.

Why didn’t Panorama mention the autopsy reports or challenge the Israeli spokespersons on the fact that the dead victims were shot many times and at close range, thus negating the claim of ‘self-defense’ by the Israeli commandos? More importantly, why didn’t Corbin challenge the simple fact that when you attack and board a civilian ship in the dead of the night with fully armed commandos, helicopters, live rounds, warships and Zodiac boats, the self-defense argument is automatically negated because YOU ARE BEING THE AGGRESSOR.

Why wasn’t the footage shown of the Israeli assaults on the activists? We were able to continue broadcasting for a short period of time even as the Israeli military tried to execute a blackout on their crimes after they started attacking, and some of us were able to smuggle footage out that was uploaded on the internet. This footage shows the Israeli commandos killing the activists, but this was probably incompatible with the agenda that BBC has in mind. Why wasn’t this footage shown and why weren’t the Israelis questioned on this, in the same manner Corbin was showing the Israeli footage to Bulent Yildrim and questioning him on it?? Or do the Israelis get a free pass?

The true evil, Nazi-like, fascist, racist nature of the Israelis came through loud and clear when approximately 26-27 minutes into the show, the Israeli spokesperson incredibly stated “I don’t think the force was excessive”. Within an hour, they had committed a massacre killing 9 people and wounding dozens. How many more before the Israelis think the force is excessive?! And in the same clip, we see there is no response by Panorama’s reporter to this outrageous statement, and no pressing further as to why the deaths of 9 innocent civilians is so cheap to him. Merely meek, repugnant, submissive complacency by Panorama.

As someone who’s been involved with the media for many years now and who helped established a media watchdog group in the USA that was quite influential, I can honestly say that this is one of the shoddiest pieces of “journalism” I have ever seen.”