Why is Israel part of the Eurovision song contest?
by Mariam Barghouti
21 Mar 2019 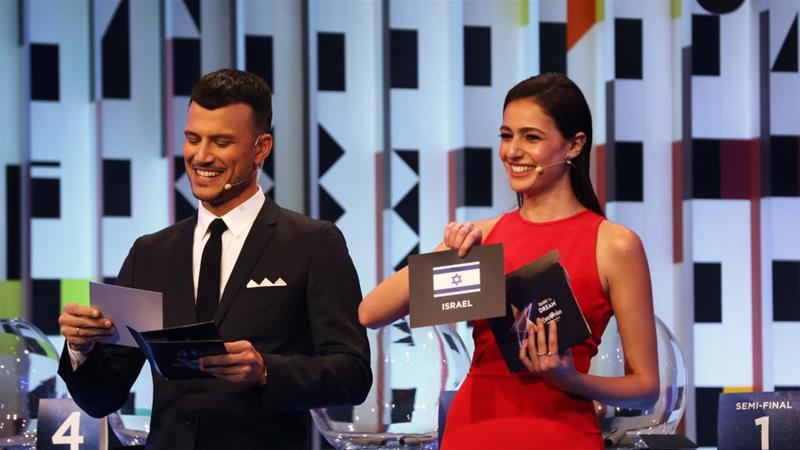 With with 77 Killed; Over 150K Displaced
REPORTfrom Union of Medical Care and Relief Organizations Published on 04 May 2019
FOR IMMEDIATE RELEASE

Geneva, Switzerland – In the past 72 hours there has been a surge in airstrikes, barrel bomb attacks and artillery strikes in Idlib and Hama, Syria. At least 77 civilians have been killed and over 150,000 IDPs displaced in the past seven days. Most cities in Northern Hama are almost completely evacuated. The areas are already over populated and lack in camps and housing for the newly displaced, leaving large numbers with no shelter, exposed to the elements. Five medical facilities and five schools were also bombed and put out of service this week. Many hospitals and schools have suspended operations. There are over 3.5 million people in Northwestern Syria including 350,000 people living in refugee camps. The region already suffers from severe shortages in healthcare, food, shelter and sanitation and cannot withstand further destabilization.

The five medical facilities that were targeted and put out of service include: Al Latamna Hospital, Qalaat Al-Madiq Hospital, Al Habeet Primary Health Care Center, Qastoon Primary Health Care Center, and the Surgical Unit in Kafr Naboodha. No casualties were reported from these attacks and one nurse was injured in the Kafr Naboodha attack. Earlier today a Syrian Civil Defense Worker (White Helmet) was killed as he was rescuing people in an attack. The former administration officer of Sham Hospital, a prominent actor in the Hama Health Directorate, and current accountant at the Al-Madiq Hospital, was killed as a missile struck his car near Al Madiq hospital.

“If these attacks are allowed to continue, we will witness the apocalypse in Syria. It will be like nothing we have seen in the past 7 years of war. Specifically, the genocide of thousands of civilians and the displacement of millions to surrounding countries. The battle of Idlib and the refugee crisis it will create will threaten global peace and security. The UN Security council, mandated with upholding global peace and security, along with world at large, must take proactive steps to ensure the battle of Idlib is deescalated and resolved peacefully immediately. Right now, hundreds of thousands of people are being pushed into smaller and smaller areas and will inevitably be slaughtered. We know how this story plays out; the bombing of schools and hospital, indiscriminate barrel bomb attacks, chemical weapon attacks and scores of children brutally disfigured and killed. WE CANNOT LET IT HAPPEN AGAIN!” Said Dr. Hussam Al Fakir, Chairman of UOSSM International

In the strongest terms, UOSSM urges all parties to the conflict to find a peaceful resolution. We urge the UN Security Council and the international community to implement UNSC resolution 2286 for the protection of medical facilities and aid workers. We urge the international community to release emergency humanitarian funding for medical aid, shelter, food, water and sanitation.

About UOSSM :
UOSSM (Union des Organisations de Secours et Soins Médicaux) provides free medical aid to the people of Syria regardless of nationality, ethnicity, gender, religion or political affiliation. UOSSM international, founded by Syrian Doctors around the world, started in 2012 and operates 12 major hospitals and supports 120 clinics inside Syria. UOSSM has performed over 1,000,000 medical treatments inside Syria since inception.