We’ve been following J Street’s attempts to counteract the growing BDS movement. First there was its aborted release of a public letter criticizing the Toronto Declaration. Then there was the workshop at its student conference called “Reckoning with the Radical Left on Campus: Alternatives to Boycotts and Divestments.” The workshop didn’t go quite as planned either as many students who attended actually offered their support for divestment campaigns targeting the Israeli occupation. You would think these two initial missteps would lead J Street to reconsider which way the wind is blowing. Nope.

The culture of fear and distrust that has grown up around this century’s terror culture and its associated wars has created vast new markets for anything that can be branded with the words security or defence.
In April 2010, London’s Kensington Olympia will play host to a Counter Terror Expo, put on by DSEi’s infamous events’ organiser, Clarion, and sponsored by French arms company, Thales.
Officially supported by a plethora of military, police and private security associations, the expo will showcase over 250 security, surveillance and specialist logistics companies; state agencies including NATO and the MoD; and anyone else claiming to provide protection against terrorism for both the armed forces and civilian populations.
Joining the fray are a number of corporations involved in creating identity verification technologies. The biometrics and database management companies whose invasive products, based on the recognition of physiological characteristics, are finding voice as futuristic ‘solutions’ in, what is deemed, an ‘increasingly dangerous world’.

I am Israel. Written by Hashem Said on Feb.25.2002 . Video made by Jihane Al Quds on Sept.4.2009. Hashem Said is an officer in the UW Palestinian student group Hayaat.

Adam Holm was corrected by his superiors from Danmarks Radio recently for having published a news paper article expressing his strong support for Israel.

On this occation a stoic Finkelstein manages to get Adam Holm off balance as Holm more and more desperately tries to counter Finkelsteins simple message: Uphold international law in connection with Israel as with any other state. Adam Holms clearly emotional approach says more than a thousand words.

Denmark: No government support for closer EU ties to Israel after visit by Avigdor Lieberman

The declassified FBI report may be downloaded from the Israel Lobby Archive
The FBI file, kept secret for 25 years, was recently released to the Institute for Research: Middle Eastern Policy (IRmep) through Freedom of Information Act (FOIA) requests. The declassified files, their historical context, and long term impact on jobs and exports are detailed in the new book “Spy Trade: How Israel’s Lobby Undermines America’s Economy.” “Spy Trade” also analyzes AIPAC’s long history of guidance and material support from the Israeli government. 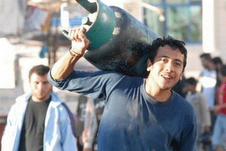 Gaza City, November 15, 2009, (Pal Telegraph) The ongoing Israeli siege has been gravely suffocating the life of people of the Gaza Strip. The fuel companies in the Gaza Strip have been warning of the imminent humanitarian crises that the cooking gas is about to get depletion after 25 days of cutting access to the Gaza fuel sanitation.

It is warily reported by Mahammed Al Shawwa, the head of the union of fuel companies in the Gaza Strip, that the gas sanitations in the Gaza Strip has stopped supplying people of their needs of the cooking gas.

It is worthily mentioning that the Israeli occupation authority has allowed limited amount of gas cooking in the last few months. Shawwa stated that for 25 days, the Israelis authorities haven’t allowed needed gas amount for the people of the Gaza Strip.

Shawwa clarified that the Israeli occupation authority has recently stopped using Al-Shajaia crossing to enter cooking gas and industrial diesel into Gaza and instead it allows in small quantities through Karam Abu Salem crossing which lacks infrastructure needed to supply Gaza with sufficient fuel shipments.

Shawwa appealed on the international community to put pressure on the Israeli side to allow the needed gas shipments entry in the Gaza Strip and to increase the shipments so as to alleviate part of the Gazans suffering and end the humanitarian crisis.
—
Most Grateful Regards From Gaza

A thorn in the world’s side

Israel in midst of freefall on global front, yet we’re preoccupied with nonsense

I’ve been invited to deliver a lecture about Israel’s economy and society at Oxford University. As it is a short lecture, and a respectable forum, I gladly accepted the offer. The invitation was extended about six months ago. Yet now, as my trip approaches, I feel concern. I’m hesitating.