Who is the Israeli state loyal to? 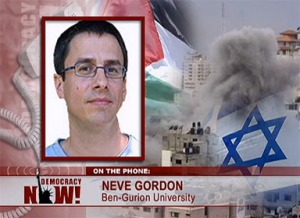 Neve Gordon argues that the demand of a loyalty oath in Israel has ominous similarities to the demands made by Mussolini’s Italy, and that the Israeli state must “be loyal to all of its citizens, regardless of race, colour, gender, language, religion, political opinions, national or social origin, property or birth status”.

“Several weeks ago, hundreds of students demonstrated in front of Ben-Gurion University’s administration building. About a third of the protestors were expressing their opposition to the government’s decision to attack the Gaza relief flotilla, while the remaining two thirds came to support the government. At one point the pro-government protesters began chanting: ‘No citizenship without loyalty!’

While loyalty is no doubt an important form of relationship both in the private and public spheres, unpacking its precise meaning in the Israeli context reveals a disturbing process whereby the democratic understanding of politics is being inverted.

As Israeli citizens, Prime Minister Binyamin Netanyahu and Foreign Minister Avigdor Lieberman want us to prove our loyalty to the flag by supporting a policy of oppression and humiliation. We must champion the separation barrier in Bi’lin and in other places throughout the West Bank. We have to defend the brutal destruction of unrecognized Bedouin villages, and the ongoing land grab both inside Israel and in the occupied Palestinian territories. We must support the checkpoints and the silent transfer in East Jerusalem.

We are also expected to bow our heads and remain silent every time government ministers, Knesset members and public officials make racist statements against Arab citizens. We must support the neo-liberal policies that continuously oppress Israel’s poor, and we are obliged to give our blessing to the imprisonment of the Gaza Strip’s 1.5 million residents.

Hearing the chants at the recent demonstration, I understood that I will never be able to accept this disastrously myopic form of loyalty. I refuse to be loyal to a policy of humiliation, racism and discrimination.

And, yet, loyalty is an important issue that urgently needs to be discussed because ultimately there is a firm link between the state and loyalty. The pressing questions that need to be addressed are: what is the meaning of loyalty? And who is supposed to be loyal to whom?

Surprisingly, the answer to these questions is not particularly complex. According to the republican tradition, the state is first and foremost obliged to be loyal to its citizenry and is held accountable for inequities and injustices. Yet we are currently witnessing a complete reversal of the republican relationship between state and loyalty and the adoption, instead, of a proto-fascist approach.

Perhaps the most disturbing feature of this trend is that it is taking place on all levels of Israeli society. From the ongoing attacks against Israeli human rights organizations spearheaded by NGO Monitor and Im Tirzu, through the police response to the peaceful protests in Sheikh Jarrah, and all the way to the McCarthyist atmosphere in the Knesset Education Committee, one witnesses how elements within civil society, the executive branch and the legislative branch are all working according to a logic similar to the one that informed Mussolini’s Italy. All of these elements expect citizens to swear loyalty to the state regardless of the government’s policies.

However, because loyalty is a vital component of politics, we need to strive to ensure that the call for loyalty meet the requirements of a democratic rather than a fascist logic. We must demand that the state be loyal to all of its citizens, regardless of race, colour, gender, language, religion, political opinions, national or social origin, property or birth status.

A state that is loyal to its citizens does not discriminate between Jews and Arabs, does not expropriate land from Muslims and Christians, does not humiliate and trample on the lower classes and does not brutally oppress the Palestinians in the occupied territories. A state of this sort protects the rights of each and every citizen and, thus, will not need to demand loyalty because it will receive loyalty on a silver platter.

Yes, I too understand the importance of loyalty. But the appropriate chant is not “No citizenship without loyalty!” but rather “Loyalty to every citizen!”.

Neve Gordon is the author of Israel’s Occupation (University of California 2008) and can be reached through his website www.israelsoccupation.info.

The secrets in Israel’s archives : Evidence of ethnic cleansing kept under lock and key

By Jonathan Cook in Nazareth

Jonathan Cook reports that secrets of serious war crimes, such as the ethnic cleansing of the Syrian Golan Heights following the 1967 war, lay behind the Israeli government’s decision to extend from 50 to70 years the period during which sensitive state documents must remain classified.

History may be written by the victors, as Winston Churchill is said to have observed, but the opening up of archives can threaten a nation every bit as much as the unearthing of mass graves.

That danger explains a decision quietly taken last month by Binyamin Netanyahu, the Israeli prime minister, to extend by an additional 20 years the country’s 50-year rule for the release of sensitive documents.
“The state’s chief archivist says many of the documents ‘are not fit for public viewing’ and raise doubts about Israel’s ‘adherence to international law’, while the government warns that greater transparency will ‘damage foreign relations’.”

The new 70-year disclosure rule is the government’s response to Israeli journalists who have been seeking through Israel’s courts to gain access to documents that should already be declassified, especially those concerning the 1948 war, which established Israel, and the 1956 Suez crisis.

The state’s chief archivist says many of the documents “are not fit for public viewing” and raise doubts about Israel’s “adherence to international law”, while the government warns that greater transparency will “damage foreign relations”.

Quite what such phrases mean was illustrated by the findings of a recent investigation by an Israeli newspaper. Ha’aretz revisited the Six Day War of 1967, in which Israel seized not only the Palestinian territories of the West Bank and Gaza, but also a significant corner of Syria known as the Golan Heights, which Israel still refuses to relinquish.

The consensus in Israel is that the country’s right to hold on to the Golan is even stronger than its right to the West Bank. According to polls, an overwhelming majority of Israelis refuse to concede their little bit of annexed Syria, even if doing so would secure peace with Damascus.

This intransigence is not surprising. For decades, Israelis have been taught a grand narrative in which, having repelled an attack by Syrian forces, Israel then magnanimously allowed the civilian population of the Golan to live under its rule. That, say Israelis, is why the inhabitants of four Druze villages are still present there. The rest chose to leave on the instructions of Damascus.

One influential journalist writing at the time even insinuated anti-Semitism on the part of the civilians who departed: “Everyone fled, to the last man, before the IDF [Israel Defence Forces] arrived, out of fear of the ‘savage conqueror’… Fools, why did they have to flee?”
“…all but 6,000 of the Golan’s 130,000 civilians were either terrorized or physically forced out, some of them long after the fighting finished.”

However, a very different picture emerges from Ha’aretz’s interviews with the participants. These insiders say that all but 6,000 of the Golan’s 130,000 civilians were either terrorized or physically forced out, some of them long after the fighting finished. An army document reveals a plan to clear the area of the Syrian population, with only the exception of the Golan Druze, so as not to upset relations with the loyal Druze community inside Israel.

The army’s post-war tasks included flushing out thousands of farmers hiding in caves and woods to send them over the new border. Homes were looted before the army set about destroying all traces of 200 villages so that there would be nowhere left for the former inhabitants to return to. The first Jewish settlers sent to till the fields recalled seeing the dispossessed owners watching from afar.

The Ha’aretz investigation offers an account of methodical and wholesale ethnic cleansing that sits uncomfortably not only with the traditional Israeli story of 1967 but with the Israeli public’s idea that their army is the “most moral in the world”. That may explain why several prominent, though unnamed, Israeli historians admitted to Ha’aretz that they had learnt of this “alternative narrative” but did nothing to investigate or publicise it.

What is so intriguing about the newspaper’s version of the Golan’s capture is the degree to which it echoes the revised accounts of the 1948 war that have been written by later generations of Israeli historians. Three decades ago – in a more complacent era – Israel made available less sensitive documents from that period.

The new material was explosive enough. It undermined Israel’s traditional narrative of 1948, in which the Palestinians were said to have left voluntarily on the orders of the Arab leaders and in the expectation that the combined Arab armies would snuff out the fledging Jewish state in a bloodbath.

“Ethnic cleansing is the common theme of both these Israeli conquests [1948 and 1967]. A deeper probe of the archives will almost certainly reveal in greater detail how and why these ‘cleansing’ campaigns were carried out – which is precisely why Mr Netanyahu and others want the archives to remain locked. ”

Instead, the documents suggested that heavily armed Jewish forces had expelled and dispossessed hundreds of thousands of Palestinians before the Jewish state had even been declared and a single Arab soldier had entered Palestine.

One document in particular, Plan Dalet, demonstrated the army’s intention to expel the Palestinians from their homeland. Its existence explains the ethnic cleansing of more than 80 per cent of Palestinians in the war, followed by a military campaign to destroy hundreds of villages to ensure the refugees never returned.

Ethnic cleansing is the common theme of both these Israeli conquests. A deeper probe of the archives will almost certainly reveal in greater detail how and why these “cleansing” campaigns were carried out – which is precisely why Mr Netanyahu and others want the archives to remain locked.

But full disclosure of these myth-shattering documents may be the precondition for peace. Certainly, more of these revelations offer the best hope of shocking Israeli public opinion out of its self-righteous opposition to meaningful concessions, either to Syria or the Palestinians.

It is also a necessary first step in challenging Israel’s continuing attempts to ethnically cleanse Palestinians, as has occurred in the last few weeks against the Bedouin in both the Jordan Valley and the Negev, where villages are being razed and families forced to leave again.

Genuine peacemakers should be demanding that the doors to the archives be thrown open immediately. The motives of those who wish to keep them locked should be clear to all.

Jonathan Cook is a writer and journalist based in Nazareth, Israel. His latest books are “Israel and the Clash of Civilisations: Iraq, Iran and the Plan to Remake the Middle East” (Pluto Press) and “Disappearing Palestine: Israel’s Experiments in Human Despair” (Zed Books). His website is www.jkcook.net.