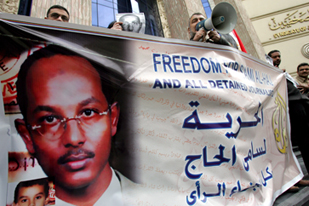 Al-Hajj received support from journalists around
the world during his detention [EPA]
Sami al-Hajj, an Al Jazeera cameraman released from Guantanamo Bay earlier this month, is set to return to Qatar.

Al-Hajj will be accorded a public reception by the news network on arriving in Doha on Saturday.

He spent six years in the US detention centre without being formally charged.
ARTICLE HERE

For the last 60 years, all those who have sought a genuinely peaceful and fair solution for Israel and Palestine have faced the same obstacle — Israel’s sense of invincibility and military arrogance, abetted by the US and other Western governments’ unwavering support.

Media coverage of the 60th anniversary of the Nekba

MIR: McClellan – Our Minister of Misinformation

Answers to these questions and more on Link TV’s Mosaic Intelligence Report presented by Jamal Dajani.

More on the topic

From Layla Anwar’s blog
Do you have any idea what’s happening to the 4.5 million Iraqi refugees also known as DPs (displaced person) ?

DPs walking around with numbers and badges, carrying pieces of yellowed paper, application forms that they’ve shown over and over, old ID cards, expired passports, begging an administrator, supplicating an officer, knocking on NGOs doors only to hear what they’ve heard before —sorry we can’t help you.

Kawthar and her sister. Two orphaned women, the rest of the family has been murdered by the Mahdi Army, you know the Mahdi army don’t you? The ones you support as a “patriotic resistance”. Forced to leave their home in Baghdad and now in Damascus. The deal is they pay a rent they can’t afford in exchange for food, sharing an apartment with a Syrian family.

What about Qutaiba – Do you know Qutaiba ? He’s 20 years old. He dreams of becoming a doctor, no university accepts him and besides, he can’t afford it. He plays football with plastic slippers, he has no shoes. He looks forward to summer, so he can play football barefoot in some garbage dump that he considers his football field. “I am king here” he says, looking at the waste surrounding him.

The old lie that palestine was dry desert waiting for a people is just that–a lie. This clip for all people to see the Beauty of the Palestinian People before they were ethnically cleansed and murdered and made into refugees by the State of Israe.
Music Joaquin Rodrigo, lyrics Helmut Lotti, sung by Lotti
All Photos (b&w) from http://fai.cyberia.net.lb/
For Hani, My husband, Best friend & Hero

And here an album with pictures of the Nekba

Angry vets testify to horrors of killing innocent people, and the way they came to dehumanize those they were supposedly sent to “liberate.”

“I was ordered multiple times by commissioned officers and noncommissioned officers to shoot unarmed civilians if their presence made me feel uncomfortable,” Sgt. Jason Lemieux told a panel of lawmakers last Thursday in a packed public hearing on Capitol Hill. “These orders were given with the understanding that my immediate chain of command would protect our subordinates from legal repercussions.”
READ ON

Nasty Double Standards on Man-made Catastrophes and Crimes against Humanity

Myanmar has been hit devastated by Cyclone Nargis and tens of thousands are dead, tens of thousands more require food and medical aid.1 The Myanmar regime is accused of blocking and delaying aid to its people.

The Myanmar regime is not a regime that I will defend. It is a militaristic clique that has seized power and rules by force. Nevertheless, much the same can be said about the US regime. Unlike the US regime, however, the Myanmar regime, basically, confines its perfidy to within its own borders.

Of course, whenever humans are in trouble, a responsible government will see to it that those humans are attended to, fed, and cared for.

The Myanmar government is accused by western governments and western media of negligence and worse towards its own citizens.