The November 2012 cease fire has been abandoned after 3 Israeli teenagers were killed and a revenge attack on a Palestinian teenager escalated into rocket attacks.
Abandoning the cease fire comes at a time as Israel seeks to continue its strangle hold control as the single energy producer for the region. Egypt, the wold’s largest Arab populace is almost completely reliant on Israel for energy. This may be seen by Hamas as a reason for not using an Egyptian intermediary in continued peace talks with Israel and as a method to stop further Israeli control in the energy sector of the Arab nations.

Mark Regrev is the Israeli Prime Ministers spokesperson…he is speaking here with Australian Television 14th July 2014.
His well practised spin is like a sing song prayer, hypnotising the watcher like some vaudeville character.

Iranians welcoming the Geneva delegation back home, Serat News, Nov. 25
According to Sheera Frenkel, Israeli officials were made aware by Saudi Arabia of the backdoor talks between the US and Iran detailed in depth by Laura Rozen at Al Monitor this past weekend, which culminated in the interim Geneva agreement. In brief, the deal will see Iran recoup some US$7-8 billion in sanctions relief through 2014 if, in exchange, Tehran does not enrich any more uranium over 5%, allows for new IAEA site inspections, and downgrads its remaining enriched-to-20% uranium stockpile. Some outstanding issues, like the Arak heavy water reactor under construction and Iran’s “right to enrich,” remain to be discussed in talks down the road. Saudi Arabia would not have been a venue for these talks, of course – nor would its closest GCC associate, Bahrain, given the Al Khalifas’ mistrust of the Islamic Republic – but other Gulf states were. Namely Oman — which the US uses as a third party to approach untouchables like the Taliban and the Islamic Republic — and perhaps the UAE as well (unlike its Saudi neighbors, the Emirati Cabinet very quickly  welcomed the interim accord). News of the meeting went from these states to Riyadh and then probably got to Tel Aviv, obviously infuriating the Israelis because they were not told up front about the talks.

So, if the Israelis did know weeks in advance, that makes Netanyahu’s intransigence this past Fall more explainable. Appraised of the progress being made in the talks outside normal channels, he was nonetheless unable to make public Israel’s foreknowledge of the deliberations. He is not so reckless as to think he could get away with letting the cat out the bag like that; doing so really would cause significant damage to US-Israeli relations. He had few options to confront a process leading to a deal he opposed because it did not dismantle all Iranian nuclear capabilities. He and his supporters leaned on the most receptive audiences they had: the US Congress, the French Foreign Ministry, and the Sunday talk show circuit, making the case that no deal would be better than a “bad deal”.

Some officials gave Yedioth Ahronoth and Channel 10 details of US-Iran meetings that showed the backdoor to Iran was in place for at least a year. These reports, however, did not affect the pace of the negotiations or public opinion. Netanyahu now has to worry a lot more about the home front, where he faces members of the security establishment expressing support for the deal, politicians outside his coalition criticizing his criticism of Obama, and his reappointed Foreign Minister, Avigdor Lieberman, breathing down his neck. Even the Israeli stock exchange seems to be weighing in against him: its ongoing rally, which began days before Sunday, was not adversely impacted by the deal.

More importantly, though, is what this episode says about the response of certain American allies to the interim deal. The Saudis are unhappy, and Netanyahu even more so. But their leverage going forward is limited, even though it would not take much to trip up the agreement if Iran is found to be in non-compliance. The Obama Administration has thrown its entire political capital behind the deal, which will be very hard, even for AIPAC and Democratic hawks, to handle. There is very little the Saudis can do after already protesting the US handling of the Syria crisis with their refusal of a UN seat and their minister-princes’ complaints in The Times, Bloomberg, and The Wall Street Journal. As an al Quds al Arabi editorial put it, “[i]n order to reach this agreement, Iran has played the many cards it has been working to prepare for decades, and also the cards it has acquired from the mistakes of the United States and its European allies after the occupation of Afghanistan and Iraq, and from the accumulation of the mistakes of the Arab regimes, which do not have a single balancing pillar that presents a real strategy for confronting the real danger surrounding the Arab region.”

But worst of all from Netanyahu’s perspective, is that in offering sanctions amelioration, Iran seems to gain legitimacy in international affairs (for Saudi Arabia, this fear is also felt, and directly connected to the outcome of the Syrian civil war). This deal is a stopgap measure meant to halt Iranian activities while negotiations continue, so it is not an economic godsend. Chip away at the sanctions regime, and Iran’s economy could start to see results, which is especially important for the leadership if this deal leads to a lasting agreement. But it is the prospective dilution of these sanctions (not their financial bottom-line) that deeply disturbs Netanyahu, whether you believe he is serious about it being 1938 all over again or not, because it raises the possibility that Europe and the US will defer less and less to his demands to keep Iran diplomatically and economically isolated.

The public mood in Iran is mixed between caution and acclaim. The returning negotiating team was feted, and did not seem to draw the sort of hecklers who came out to greet President Rouhani when he returned from the UN. As Golnaz Esfandiari reports, crowds waiting for Iranian Foreign Minister Zarif in Tehran chanted “Kayhan, Israel, Condolences, Condolences” (Kayhan is a hardline newspaper, which like other conservative outlets close to the Supreme Leader emphasized the “flexibility” aspect of the interim deal, downplaying Iran’s concessions – in part because the deal is  vague on recognizing the “natural rights” of Iranian nuclear work – and the impact of the sanctions thus far). But overall, the reception in the media was positive and the deal is a loss for the ultraconservative arm of the Islamic Republic’s leadership, which would like to pretend the Revolution is still ongoing. By agreeing to the terms of the deal, Iran is electing to participate in the international system on that system’s terms (unlike fellow nuclear pariah North Korea). And if economic relief can develop further, even more Iranians, perhaps, may begin to wake up to the fact that the sanctions have been exploited inside Iran to greatly enrich not just certain businessmen and politicians, but the twin pillars of the state itself: the Supreme Leader’s office, and the Revolutionary Guards.

Yesterday in Saudi Arabia, best-selling novelist Turki al-Hamad, one of the KSA’s most well-known writers, was arrested for remarks he posted on Twitter. 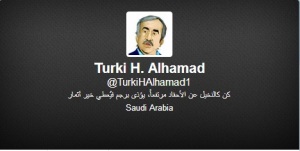 The tweets in question — about a dozen of them, published on Dec. 22 – criticize religion. These two are trans. Guardian journalist Brian Whitaker, who has written about the arrest on his blog:

One said: “The Prophet came with a humanitarian religion but some changed it into anti-human religion.” Another said: “All religions call for love … practices and rituals do not mean what is going on in the heart.”

Al-Hamad, best-known for his coming-of-age trilogy, Phantoms of the Deserted Alley, must have known what he was doing might be dangerous. His arrest follows not long after the arrest of young Saudi poet Hamza Kashgari, who was taken in last February after tweeting an imaginary conversation with Prophet Muhammad.

Al-Hamad was jailed in his youth for political activism before moving to the US for graduate school. His novels have by and large not been well-reviewed, but they certainly stirred readership and controversy in the KSA. On the front cover of one of his novels, it says: “Where I live there are three taboos: religion, politics and sex. It is forbidden to speak about these. I wrote this trilogy to get things moving.”