Russia and Syria vow to ‘wipe out terrorists’ in Idlib

Humanitarian fears grow as Russian and Syrian FMs signal all-out attack on last rebel-held stronghold is imminent.
The Syrian government and its major ally Russia have signalled that an all-out offensive to retake the last rebel-held province in Syria is only a matter of time, raising fears of a major humanitarian crisis.
Speaking at a press conference in Moscow with his Syrian counterpart Walid al-Muallem following a closed-door meeting, Russian Foreign Minister Sergey Lavrov stated that the majority of Syria had been “freed of terrorists”, save for Idlib, a northeastern province bordering Turkey.
“What we need to do now is to wipe out those terrorist groups which persist, particularly within the de-escalation area of Idlib,” he said.
“It is unacceptable that those terrorists particularly al-Nusra Front are using the de-escalation area of Idlib to attack the Syrian army and to also attack through drones the Russian military bases in the area,” he added referring to Hay’et Tahrir al-Sham (HTS), which is dominated by a rebel faction previously known as al-Nusra Front before renouncing its ties to al-Qaeda.
For his part, al-Muallem said the Syrian forces will “go all the way” in Idlib but added that the army will do everything possible to avoid civilian deaths.
Humanitarian concerns
Idlib is home to nearly three million people, up to half of whom are rebels and civilians transferred en masse from other areas such as Aleppo, Eastern Ghouta and Deraa after they fell to Syrian pro-government forces following heavy fighting.
The situation on the ground is further complicated by the direct presence of Turkey, which backs certain rebel groups in the area and operates as a guarantor power to ensure a “de-escalation zone” agreed upon with Syrian President Bashar al-Assad’s allies Russia and Iran at a meeting in Kazakhstan’s capital, Astana.
In recent weeks, Turkish-backed opposition groups in Idlib have attempted to unify into a new coalition, with some 70,000 fighters pledging to fight against forces loyal to Assad. But HTS, the most dominant rebel force in Idlib and in control of about 60 percent of the province, has not joined the coalition.

A major military operation in Idlib would pose a particularly threatening humanitarian situation because there is no opposition territory left in Syria where people could be evacuated to. Observers have previously warned as many as 2.5 million Syrians could try to flee to the closed Turkish border, creating a new refugee crisis.
“The question is how costly the assault on Idlib is going to be,” said Al Jazeera’s Rory Challands, reporting from Moscow.
“It’s not a question of if it will happen, it is a question of when and the severity of it,” he added, noting that the Russian and Syrian governments believe that the seven-year war will largely be over if they capture Idlib.
Hundreds of thousands of people have been killed and millions displaced since Syria’s war started in 2011 with the brutal repression of anti-government protests.
Warnings and reconstruction
Speaking at the press conference, Lavrov called on the international community to join in the reconstruction process of Syria and “actively get down to work on modernising the infrastructure which has been devastated”.
“We can see that there is a very swift mobilisation of the international community taking place particularly with regards to the return of the refugees and the revival of socioeconomic assets and facilities to make sure the country gets back to working order,” he said.
“The Russians know that as the pre-eminent military force in Syria, some of the responsibility of rebuilding Syria falls on them,” Challands said, “but they don’t want to shoulder all the bill, so they’re encouraging as many foreign powers as they can to chip in essentially and get the country back on its feet.”


Al-Muallem said Russia and Syria are united in their views regarding the next stage of rebuilding Syria.
“It’s natural to think about Syria to find a reconstruction programme and to find a role for our partners in Russia to play a key role and priority in this,” he said, adding that both countries are very near to “putting an end to terrorism” in the country.
Both ministers warned against any “act of aggression” from Western countries, particularly from the United States, citing staged chemical attacks by “provocateurs” such as the Syrian civil defence group the White Helmets being used as a pretext for such assaults.
“This kind of provocation is being staged as to complicate the whole issue of combatting the terrorists in Idlib,” Lavrov said. “We have warned our Western partners clearly that they should not engage in this kind of activity.
Al-Muallem accused the US and its allies of preparing for “another aggression to save al-Nusra Front” and protract the Syrian conflict.
“We will practise our legitimate right in defending ourselves, but the consequences of the aggression will hit the political process definitely and everyone will be [affected],” he said.

Nature of offensive unknown
Turkey, which hosts some three million Syrian refugees, has already stated that it will not open its borders to accept further refugees in the event an assault takes place.
The Syrian government said that it will open “humanitarian corridors” for civilians to evacuate, but according to Al Jazeera’s correspondent Zeina Khodr, many of the residents do not trust the government and remain fearful of their fate.
“Many of these people are considered terrorists or are wanted by the state simply because they engaged in opposition activities,” Khodr said, reporting from Lebanon’s capital, Beirut. “Being a medic according to the Syrian government is terrorism.”

Earlier on Thursday, UN Syria envoy Staffan de Mistura warned that a potential “perfect storm” is looming over Syria’s Idlib province, and expressed his willingness to “personally and physically” involve himself to ensure a corridor to evacuate civilians would be feasible.
While it is not yet clear what kind of offensive the Syrian government will engage in Idlib, Khodr said that there are still “behind the scenes negotiations between the Russians and the Turks” on this matter.
“What we understand from some sources is that Turkey is trying through its contacts in Idlib to convince Hay’et Tahrir al-Sham to disband itself to prevent this all-out offensive,” she said.
“We even heard Lavrov tell the Syrian government ‘we are talking about the need to reconcile with some groups’ telling them in one way or another that there will not be a wide-scale attack.”
Russia pushing forward
According to Alexey Khlebnikov, an expert with the Russian International Affairs Council, creating another refugee crisis will be contrary to Russia’s main priorities and interests.
“This is why Russia is now trying to negotiate with Turkey to reach a compromise on the deal to minimise damage inflicted on the population in Idlib,” he told Al Jazeera.
“Now, Russia’s message to the West is to get on board and join in the reconstruction process and humanitarian aid [which] basically goes in line with that message of retaking Idlib and not creating another refugee flow.”
But Khodr said that Western countries are not prepared to join in the reconstruction, insisting first on a “meaningful, credible, political transition” to Syria.
“[The Russians] have sidelined the political transition which will involve the Syrian government sharing power with the opposition,” she said, noting that Russia is trying to cement Assad’s hold onto power.
The narrative for Russia and Syria is that they have won the war and now want to talk about rebuilding the country and returning the refugees, she said.
“They’ve appealed to the international community, particularly to the West, to give them money to rebuild the towns so that refugees will return and leave Europe but it seems they do not have the support as of yet,” Khodr said. 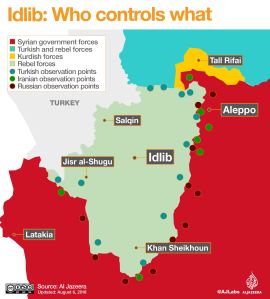 to be continued here