We need to talk to Hamas 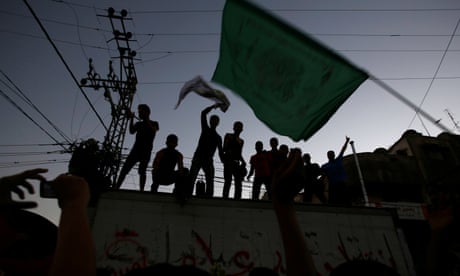 If we cared about peace we would be talking to Hamas

The west has a unique opportunity to help end the Gaza stalemate. But it suits us to turn a blind eye

In his house in the Gaza Strip last month, a senior Hamas minister was explaining to me that the movement needed to modernise its policies when the lights suddenly cut out, as they so often do under Israel’s siege of the territory. Ghazi Hamad’s disembodied voice rumbled on in the pitch black.

Shortly after that, Hamas, which governs Gaza, published what is effectively the first revision of its charter since it was founded 30 years ago. Most significantly, Hamas has for the first time put on paper its commitment to a two-state solution to the Israeli-Palestinian conflict. The movement, it said, was ready to discuss “a fully sovereign and independent Palestinian state, with Jerusalem as its capital along 1967 lines”.

The policy reforms should have opened the prospect of an end to the west’s boycott of Hamas, in place since 2007, and hope too of an end to Israel’s economic blockade. Two million Gazans, mostly refugees, are today locked behind walls and fences and deprived of bare essentials – not least electricity, which is now cut to four hours a day or less. The International Red Cross warned this week that the electricity crisis was pushing Gaza to the point of “systemic collapse”.

But the international community is once again leaving Gaza in the dark about when its torment will end. Both the US and Britain have made clear they believe that nothing significant has altered in Hamas’s position. A Foreign Office spokesman said: “They must renounce violence, recognise Israel and accept previously signed agreements.”

True, what Hamas means by its new “General Principles and Policies Document” is still murky, particularly as it still holds out the possibility of a Palestinian state in all of historic Palestine. And it has published the changes now as a strategic move to secure its own survival.

Obviously, the only rational response if we really cared about peace would be to start talking to Hamas and push it to moderate further. If we continue to reject its overtures it will have no incentive to offer more, and the rejectionists in Gaza will win.

It is significant that the Hamas paper was published soon after the election of a former military chief and hardliner, Yahya Sinwar, as the movement’s leader in Gaza. A prisoner in Israel for 22 years, and a fluent Hebrew speaker, who negotiated with Israel over the Shalit prisoner exchange in 2011, Sinwar could bring a new voice to the table. He would also have the clout internally to bring some of Hamas’s own critics on board. Hamas is being increasingly challenged by Salafi jihadists whose popularity is small but growing in Gaza, and who accuse Hamas of too much moderation.

The uncomfortable fact is that the west is only too happy to leave the people of Gaza inside their prison; it suits us to do so. We don’t care about blighted lives, or about whether the electricity is on six hours or four hours or if there is none at all. Our governments just want to leave Gaza blocked off from view so we don’t have to face up to the painfully difficult problems it poses – many of our own making, not least the boycott of Hamas.

It was after all the US, 10 years ago, that insisted on Palestinian elections, hoping the moderates of the PLO would win. Instead Hamas came to power on a wave of anger after the failure of flawed peace efforts. The west then took the view that in Palestine democracy counted for nothing, and as punishment the boycott began.

By accepting that Hamas has met at least some of the west’s conditions, we would be forced to consider talking to its representatives, clashing with Benjamin Netanyahu, who has no wish to change the status quo. Keeping Gaza boxed in while he extends his illegal settlements across the West Bank and Jerusalem, suits the Israeli prime minister just fine.

On the Gaza streets there is no expectation of any change, only predictions of a new war. After interviewing the Hamas minister I visited a Rafah girls’ school, speaking to a class of 17-year-old English students. Of the class, six had lost family members in the 2014 war. Their teacher had lost her husband and her father.

Yet here they were, bright-eyed, clutching English textbooks, and speaking of their ambitions to be doctors, social workers or journalists. The courage and resilience of the Gazan people is also hidden from view by the boycott and what they call the “apartheid wall”.

Before I left the school the girls put questions to me, including, “What does Britain know about us?” and “Why doesn’t Britain help us?” One offered her own answer: “I believe they think we live under a stone.”