The poet and novelist Omar Hazek, sentenced to two years at Borg El-Arab prison ostensibly for violating Egypt’s controversial anti-protest law, has written his seventh letter from inside prison:

The letter was written last month and published in El-Badil. It has been translated by Zahra Abdel Aziz: 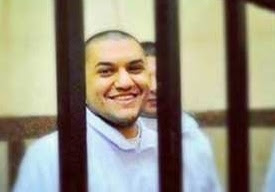 This is a lovely morning, the morning of June 12, 2014. I have just finished the revision of the fourth draft of my new novel, which I started in Hadara prison by the light of a candle and completed here in Gharbaniyat—Borg El-Arab prison. It is my habit to write half of the text or more in the first draft, and in the following drafts I complete the text after further editing either deleting or adding, and I think there may be fifth or sixth drafts. Now all the features of the novel have become clear, and I am delighted with it — so have a delightful morning, my few friends and my many brothers in loving this country.

Despite  this, there is another reason for this morning to be lovely. Yesterday, I learned that today is the beginning of the World Cup, which brings joy to millions. I don’t like football and hate its capitalism and unwise industry. Millions of the poor will be happy with unreal victories of the national teams of their countries. Let the poor become happy because there are no real reasons to be happy in their countries. These poor and simple people avoid politics and prefer to “walk close to the hall” or even walk inside it (that is, lead the quiet and keep themselves away from any troubles). These are the people that I am addressing here.

I remember a few days before the 30th of June; there was a long discussion on one of my friend’s and colleague’s Facebook wall about participation in the 30th of June. I remember that I wrote: whatever the arguments against participation, I will participate. This is because millions of the poor protested against Mubarak’s regime dreaming of a better life and they became poorer and this is enough reason to protest against any president even if he is an elected president.

I say to you poor man, my brother, when you make the tea with the biscuit packet which is worth half Egyptian pound, and turn on the old fan and sit on the sofa watching the television that you purchased through paying monthly instalments. When you are amazed by the Samba dancing at the World Cup opening ceremony, when you cannot restrain yourself while reacting after a goal or after watching a player keeping the football from the other team in a skillful way, and you start applauding, cheering, or even insulting. After the end of a very good match, you return the empty tea cups and the empty biscuit packets, or when you leave the café where you watched the match with your friends and return home, you are still analyzing the match. When something like this happens, be happy and best wishes for being happy. I just from here want you to think about a small, simple and inspiring idea.

Think of an exceptional girl — her name is Maheinor El-Masry who is currently in Abaddiyya prison in Damanhour because of a clear, shameful crime: dreaming for a better tomorrow for you, with more freedom, justice and dignity. Maheinor led our protests since Mubarak and taught me a lot, and now she’s imprisoned for defending her dreams. I am not afraid for her because I know her very well.

I also have learned that Alaa Abd el-Fattah and his companions were sentenced to 15 years in prison. Think also about thousands of young people who paid their lives and others who paid their eyes and injuries as a price for our freedom, your freedom and my freedom. Don’t forget this and don’t waste your rights, my poor brother, because life is beautiful with freedom.

A previous letter from prison and background on Hazek’s case