We are deeply concerned about the growing Syrian refugee crisis which you have accurately described as ‘the greatest refugee crisis of our time’.  As you will know, more than two million people have fled the country, including over one million children, the majority of whom are now living in extremely precarious circumstances. Figures suggest that only around 0.1% of the people fleeing the conflict have found safety in the UK while 97%, are being hosted by the neighbouring countries.

We write to you today to urge you to heed UNHCR’s call to help the countries bordering Syria by establishing a co-ordinated resettlement programme in the UK with a focus on the more vulnerable refugees, including women at risk, those with disabilities, vulnerable older adults and families with children.

We commend you for pledging £600 million in humanitarian aid to assist people in Syria and the region.  However, we are extremely concerned to hear reports of domestic violence, sexual abuse and rape from the camps on the border, and with the arrival of winter and freezing temperatures, these are plainly unacceptable environments for many at risk.

Only a resettlement programme will offer a durable solution for the most vulnerable who will struggle to survive in the harsh conditions in the region.

You are well aware of the scale of the crisis which shows no signs of abating. UNHCR has predicted that next year the total Syrian refugee population will increase to over 4 million. Unsurprisingly, given the numbers crossing their borders, Syria’s neighbours are buckling under the strain. We are extremely alarmed to hear that scores of people trying to escape the fighting, including families with small children, are being denied admission by neighbouring countries. According to an April 2013 survey, 71 per cent of Jordanians want the border with Syria to be closed to new arrivals. With thousands of people fleeing Syria everyday, this would be catastrophic.

There is a moral imperative on western countries to show solidarity with Syria’s neighbours by sharing the responsibility of protecting some of the people fleeing Syria.

UNHCR has called for western countries to take 30,000 people through resettlement or humanitarian admission with a focus on the vulnerable, a modest target given the scale of the crisis. So far 18 countries, including Germany, France and the USA, have responded to this call. Despite our proud tradition of protecting refugees, the UK has yet to respond.

We urge you to work with the UNHCR and the international community in the establishment of a global resettlement programme to help the most vulnerable find safety outside of the region. We must play our part in providing a safe haven to Syria’s refugees.

We would be grateful for your thoughts on this issue and would welcome the opportunity to meet with you to discuss it in more detail.

Baroness Kennedy of The Shaws QC

Rt Rev. and the Rt Hon. the Lord Bishop of London

Rt Rev. and the Rt Hon. the Lord Williams of Oystermouth

Syrian crisis: Peers put Cameron under pressure to ‘heed the call’ and take in refugees

Editorial: Let them in – Britain has a moral duty to help Syria’s refugees

‘No room at the inn’: Britain condemned for turning its back on Syria’s refugees

Syria in crisis: Country’s healthcare system is ‘going backwards in time, at a rate of a decade a month’

Stop the crocodile tears. We didn’t care about Syria

A Syrian woman cries holding her injured son in a taxi as they arrive at a hospital in northern city of Aleppo. (Photo: AFP/Getty)

Can we please stop the crocodile tears over Syria? If there’s one thing more nauseating than the Assad torture factories, it’s the synthetic outrage and faux horror that has greeted their discovery.

Faced with evidence the Syrian government had been using chemical weapons on its own citizens – effectively choking its own children to death in their beds – we had the chance to take a stand. Not a chance to halt the slaughter overnight, or topple the Assad regime. But to put down a marker that said “You are on notice. We will not simply walk by on the other side. Remember, though the mills of justice grind slowly, yet they grind exceeding small.”

But we chose not to send that signal, or put down any markers. Instead we thought it would be best if we just put our heads down, and scurried on past.

Of course, it didn’t happen quite like that. We had a debate first. A very thorough debate.

During that debate a number of very sophisticated arguments and questions were put forward by those opposed to military intervention. “If we do go in, what would our exit strategy be?” people asked. And as we now know, as they were doing so, somewhere in the bowels of one of Assad’s human meat-processing plants another victim was having a coil of steel wire slipped around their throat.

“What will the targets be?” was another perceptive question. And as it was asked, the steel wire was being pulled taught.

“We need more time. We need more proof” the wise men and women who stood square against the rush to war argued. And as the words left their lips another of Assad’s victims closed their eyes for the final time.

We have no way of knowing what impact, if any, targeted military intervention would have had on Assad’s thinking. It could have cowed him. It could have made him lash out.

And Assad is right. We didn’t care. Oh, we professed to care. “There will be those who believe Thursday’s vote in the House of Commons means that Britain cannot make a difference to the innocent civilians of Syria who are suffering such a humanitarian catastrophe,” wrote Ed Miliband the day after he voted down the government’s plans for a military strike. “I don’t agree.” And everybody nodded sagely in agreement. “Oh yes, there’s lots we can still do,” we told ourselves.

Fine. But please, let’s not now pile hypocrisy on top of our grotesque abdication of responsibility. No more hand-wringing. No further calls for “something to be done”. Nothing is going to be done. Because we don’t actually want it to be done. Yes, we want the horrors of Syria to disappear. We want Assad to disappear. But we want someone else to make them disappear for us, so we can go back to congratulating ourselves about how we stood tall for peace.

Yesterday I saw some people calling for Assad to be tried for war crimes. I also saw John Kerry again insisting Assad steps down and leaves Syria. I may be wrong about this, but it seems unlikely Assad is going to be going anywhere unless he has some pretty solid guarantees about immunity from future prosecution.

In the meantime he’s already in possession of some other important guarantees. Such as if he doesn’t voluntarily deliver himself up to justice, we’re not going to go in and get him. If he doesn’t voluntarily leave Syria, we’re not going to go in and make him. When his henchmen slip a wire cable around the throat of another victim we’ll say how terrible it is. And then we’ll stand back and let them pull the noose tight.

We had the chance to take a stand against Assad last year. His chemical weapons. His torture chambers. We turned our back on it. So please, no more crocodile tears. The steel noose will be in use again tonight. Let’s not demean ourselves further by pretending that really matters to us.

Listen to our weekly podcast:

“A poet dies twice: once when he publishes, and once when a statue is erected to him.” So said Iraqi poet Mahmoud al-Braikan, in a speech in memory of the great Badr Shakir al-Sayyab:

A Google doodle for al-Jawahiri, which must be another sort of death.

Al-Sayyab (1926-1964) — one of Iraq’s most gifted poets — lived and died in poverty. He was imprisoned and scapegoated by various successive regimes, and according to scholar and translator Ibrahim Muhawi, the last three years of his life “were indeed miserable,” as his poverty was compounded “with an incurable, degenerative…disease of his spinal cord…that led gradually to the paralysis of his legs and the deterioration of his nervous system, culminating in his death at the young age of 38.”

Al-Sayyab’s death did shake the world of Arabic literature, Muhawi said. By 1967, a new selection of his poetry appeared with an introduction by the Syrian poet Adonis. But it wasn’t until 1971 that he was claimed by the Iraqi government.

That’s when the Ba’athist regime, under Ahmed Hassan al-Bakr, erected a statue to the poet. In 2013, the Iraqi Ministry of Culture did one better, announcing that al-Sayyab’s family home would be turned into a cultural forum “and a tourist museum that documents his poetry works and displays to the public his personal effects, pictures, scripts and audio recordings.”

Perhaps the museum will be beautiful, educational, and a home for poets and poetry. In any case, Al-Braikan, who died in 2002, would surely not approve. But just as surely, Iraqi poet Muhammad Mahdi al-Jawahiri’s (1899-1997) second death, revealed last month and chronicled in Al-Monitor and As-Safir, is a bit unhappier. From Al-Monitor: 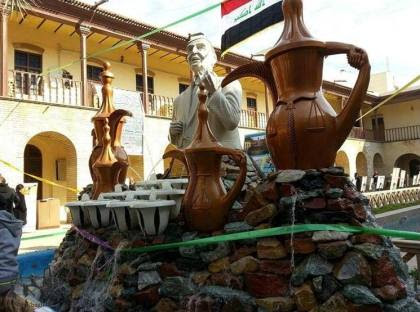 Jawahiri’s statue has become a bad joke among intellectuals, the public and the poet’s family. Jawahiri’s granddaughter saw her grandfather’s history collapse in front of her. No one in Baghdad province gave the history of that cultural and poetic figure his due.

The province put up a simple statue that said nothing about Jawahiri. It was a simple statue made of some kind of plastic material in the middle of a pool, whose water was dyed green during the unveiling celebration. But all that ugliness was not enough. They surrounded the statue with a number of coffee pots of different sizes. The statue’s head was crooked, and the coffee pots made the scene look even more ridiculous. Jawahiri’s family rushed to the governor to try to fix the monument, which offended the history of a man buried in the Ghuraba cemetery in the neighborhood of Sayyeda Zeinab, Damascus.

Baghdad assassinated Jawahiri twice, once when it forced him into exile, away from the “Tigris River of goodness,” and another time by making for him a
pathetic statue that is unworthy of his history.

The governor promised to fix the statue and to remove the coffee pots and coffee cups from around it so that the poet doesn’t get turned into a coffee seller after his death.

There’s no indication that the leftist poet would’ve been shamed or alarmed by an association with coffee-sellers. However, it’s not quite clear how the above statue won a competition that was apparently, according to the US Department of Defense news website al-Shorfa, worth 5 million dinars.

Although a popular and beloved poet — called by critic Salma Khadra Jayyusi in Trends and Movements in Modern Arabic Poetry “undoubtedly the greatest Iraqi poet of his generation” — al-Jawahiri, with his classical style, has generally been ignored by critics and translators.

According to Jayyusi, “Poetry of a unique and uncommitted nature such as that of al-Jawahiri, which does not proclaim a new doctrine of poetry, is immediately marked out as ‘conventional’ and left untreated.”

Read: Two poems by al-Jawahiri, submitted by an anonymous translator.

Another image: of the statue.