On August 31, Antiwar.com reprinted an article from Mint Press News: “Syrians In Ghouta Claim Saudi-Supplied Rebels Behind Chemical Attack.” We originally linked to it, but then reprinted on our site at the request of Mint Press because traffic on their site was crashing their server. The validity of the story was primarily based on the fact that the supposed co-author (Dale Gavlak) is a reporter for Associated Press.

Many other articles have been written which refer to the information contained in the Mint Press piece, including ones appearing on Antiwar.com.

Dale Gavlak has issued a statement saying she did not co-author the article and denies that she traveled to Syria or contributed to the article in any way. Here is his statement:

Mint Press News incorrectly used my byline for an article it published on August 29, 2013 alleging chemical weapons usage by Syrian rebels. Despite my repeated requests, made directly and through legal counsel, they have not been willing to issue a retraction stating that I was not the author. Yahya Ababneh is the sole reporter and author of the Mint Press News piece.   To date, Mint Press News has refused to act professionally or honestly in regards to disclosing the actual authorship and sources for this story.

I did not travel to Syria, have any discussions with Syrian rebels, or do any other reporting on which the article is based.  The article is not based on my personal observations and should not be given credence based on my journalistic reputation. Also, it is false and misleading to attribute comments made in the story as if they were my own statements.

The staff of Antiwar.com sincerely and deeply apologizes for being a part of spreading this article. We also apologize to Dale Gavlak. 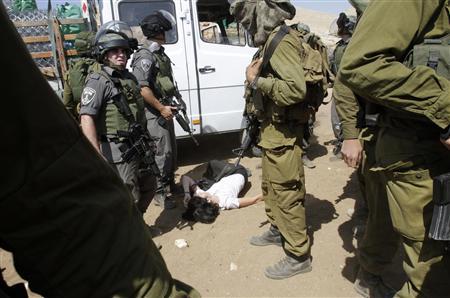 1 of 4. French diplomat Marion Castaing lays on the ground after Israeli soldiers carried her out of her truck containing emergency aid, in the West Bank herding community of Khirbet al-Makhul, in the Jordan Valley September 20, 2013.

KHIRBET AL-MAKHUL, West Bank (Reuters) – Israeli soldiers manhandled European diplomats on Friday and seized a truck full of tents and emergency aid they had been trying to deliver to Palestinians whose homes were demolished this week.

A Reuters reporter saw soldiers throw sound grenades at a group of diplomats, aid workers and locals in the occupied West Bank, and yank a French diplomat out of the truck before driving away with its contents.

“They dragged me out of the truck and forced me to the ground with no regard for my diplomatic immunity,” French diplomat Marion Castaing said.

“This is how international law is being respected here,” she said, covered with dust.

Locals said Khirbet Al-Makhul was home to about 120 people. The army demolished their ramshackle houses, stables and a kindergarten on Monday after Israel’s high court ruled that they did not have proper building permits.

Despite losing their property, the inhabitants have refused to leave the land, where, they say, their families have lived for generations along with their flocks of sheep.

Israeli soldiers stopped the International Committee of the Red Cross (ICRC) delivering emergency aid on Tuesday and on Wednesday IRCS staff managed to put up some tents but the army forced them to take the shelters down.

Diplomats from France, Britain, Spain, Ireland, Australia and the European Union’s political office, turned up on Friday with more supplies. As soon as they arrived, about a dozen Israeli army jeeps converged on them, and soldiers told them not to unload their truck.

“It’s shocking and outrageous. We will report these actions to our governments,” said one EU diplomat, who declined to be named because he did not have authorization to talk to the media.

“(Our presence here) is a clear matter of international humanitarian law. By the Geneva Convention, an occupying power needs to see to the needs of people under occupation. These people aren’t being protected,” he said.

In scuffles between soldiers and locals, several villagers were detained and an elderly Palestinian man fainted and was taken for medical treatment to a nearby ambulance.

The U.N. Office for the Coordination of Humanitarian Affairs (OCHA) said in a statement that Makhul was the third Bedouin community to be demolished by the Israelis in the West Bank and adjacent Jerusalem municipality since August.

Palestinians have accused the Israeli authorities of progressively taking their historical grazing lands, either earmarking it for military use or handing it over to the Israelis whose settlements dot the West Bank.

Israelis and Palestinians resumed direct peace talks last month after a three-year hiatus. Palestinian officials have expressed serious doubts about the prospects of a breakthrough.

“What the Israelis are doing is not helpful to the negotiations. Under any circumstances, talks or not, they’re obligated to respect international law,” the unnamed EU diplomat said.