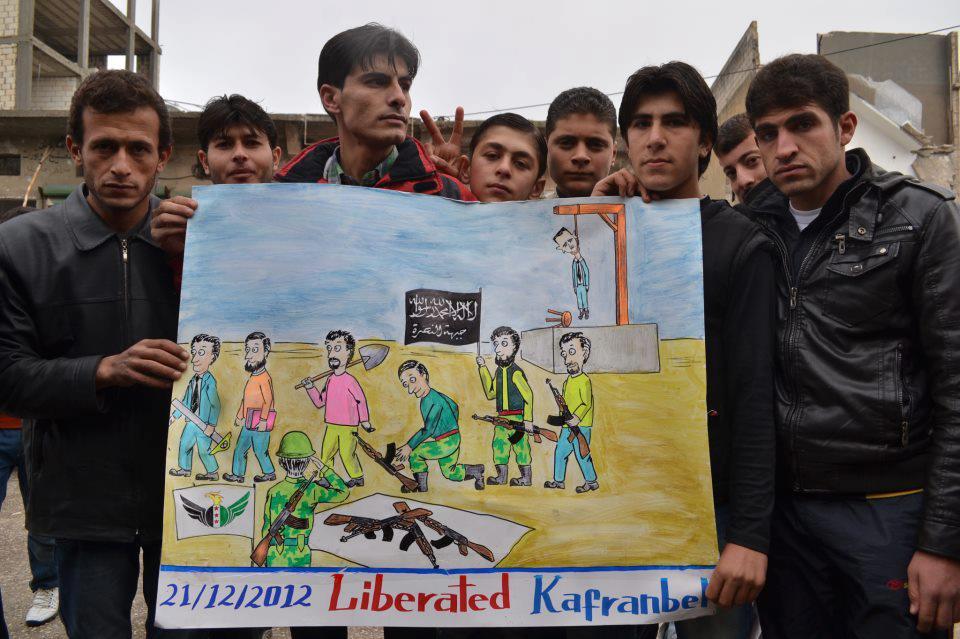 The genius behind this latest #Kafranbil poster has me speechless! Its like they read whats on our mind! #Idlib #Syria pic.twitter.com/hTuM32pw

The Myth of Dialogue with the Syrian Regime

When Seumus Milne writes article after article lamenting the lack of ‘dialogue’ between the parties in Syria, he perpetuates a myth that the Assad regime, along with its Russian and Iranian backers, has been advocating a negotiated settlement all along. The truth could not be further from the reality, and there is a real danger that the story of the Syrian revolution is being re-spun into some nefarious Western plot to eliminate the ‘last bastion of Arabism’ as one anti-imperialist commentator described it.

Because of the failure of some movements and countries to unequivocally and consistently condemn the Assad regime’s brutality from the outset, the Syrian people were left to – rightly – seek assistance from anywhere they could receive it. They did not have time to listen to people such as Milne lecturing them about how necessary it was that they should die with their families in the thousands in order to reach some indigenous solution without involving the ‘White Devil’. Better, the likes of Milne were telling Syrians, to die for, and in doing so satisfy, the intellectual vanity of the Western Anti-imperialist vanguard.

Milne, rightly, warns of Western military adventures in the Middle East but he claims that Syria is next on the list. What he does not mention is that the West has, for over twenty months, sought every excuse _not_ to intervene in Syria. He is so eager to portray events as a NATO conspiracy that he conveniently ignores the fact that NATO’s Secretary General Rasmussen has become a Syrian joke with his steady stream of statements that NATO will not intervene in Syria. Therefore this idea that Syria will be the target of a mass invasion of the type we saw in 2003 with Iraq belies the completely different context and restraints that exist today. Yes, the West and the Gulf states are aiding the rebels, but the majority of these rebels are Syrians who have quickly become battle hardened through no choice of their own. It was the relentless killing by Assad’s war machine which prompted them to seek and carry arms, and to ask for help from wherever they could.

Where, one can rightly ask, was Milne when the revolution was still a protest movement, like the overnight sit-in protest occupying the former Homs Clock square which was brutally dispersed with live fire? Did Milne see those countless other unarmed protestors with their faces blown off by Assad’s snipers? Or was he too busy deriding the grainy mobile phone footage as unworthy of his attention?

Then there is the question of Islam in Syria – Sunni Islam to be specific. After writing many articles justifying ‘Muslim anger’ over Western foreign policy or episodes of Quran burning, he seems to  find it astonishing that some Muslims would be equally and perhaps even more so incensed at the brutality of Assad’s forces and the documented desecration of mosques and religious insults sprayed on walls.

He raises the spectre of sectarianism as if it will be a direct consequence of the rebels winning and not of Bashar losing. Where was he, we must ask again, when the same newspaper he is writing for reported on Syria’s regime encouraging extremist Muslim fundamentalists to go across to Iraq and wreak havoc, that same havoc that anti-imperialists then blamed the United States for unleashing. Did Milne, and those who share his outlook, stop to think about this?

Syrians should rightly be concerned with the extremist elements within the ranks of the rebels, but they do not need Milne to tell them that, and they certainly don’t need his instructions on the best way to remove the regime that has killed tens of thousands of Syrians since last March. They should, also, be very concerned with lawlessness and sectarianism, but unlike Milne they have recognised that a state which mobilises its resources for mass murder and terror over a population is far more disturbing and serious than the crimes of extreme elements who are,  after all, criminals anyway. Therefore, Milne has no right to claim some kind of moral parity between ‘two sides’, and he certainly has no right to paint the opponents of Assad, in all their colours and shapes, with the same brush as al Qaeda. For Iraq and Afghanistan he has always been alert enough to recognise the divide and rule tactics of an oppressor, or to know where one must lay the blame when extremism results in atrocities and instability. No such critical thinking appears to have been applied in Syria. In fact it does not seem to have occurred to Milne and other Western anti-imperialist writers that Assad, as an oppressor, is in the same boat as the imperialism they claim to oppose.

Posted by Maysaloon at 8:04 PM