Stop pretending the US is an uninvolved, helpless party in the Israeli assault on Gaza 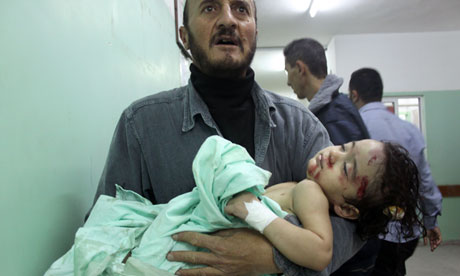 A Palestinian man carries a wounded child at a hospital following an Israeli air raid in Beit Lahia in the northern Gaza Strip, on November 17, 2012. Photograph: Moiz Salhi/AFP/Getty Images

The Obama administration’s unstinting financial, military and diplomatic support for Israel is a key enabling force in the conflict

A central premise of US media coverage of the Israeli attack on Gaza – beyond the claim that Israel is justifiably “defending itself” – is that this is some endless conflict between two foreign entitles, and Americans can simply sit by helplessly and lament the tragedy of it all. The reality is precisely the opposite: Israeli aggression is possible only because of direct, affirmative, unstinting US diplomatic, financial and military support for Israel and everything it does. This self-flattering depiction of the US as uninvolved, neutral party is the worst media fiction since TV news personalities covered the Arab Spring by pretending that the US is and long has been on the side of the heroic democratic protesters, rather than the key force that spent decades propping up the tyrannies they were fighting.

Literally each day since the latest attacks began, the Obama administration has expressed its unqualified support for Israel’s behavior. Just two days before the latest Israeli air attacks began, Obama told Palestinian Prime Minister Mahmud Abbas “that his administration opposes a Palestinian bid for non-state membership of the UN”. Both the US Senate and House have already passed resolutions unequivocally supporting Israel, thus earning the ultimate DC reward: the head-pat from Aipac, which “praised the extraordinary show of support by the Senate for Israel’s struggle against terrorist attacks on its citizens”. More bipartisan Congressional cheerleading is certain to come as the attacks continue, no matter how much more brutal they become.

In reflexive defense of Israel, the US government thus once against put itself squarely at odds with key nations such as Turkey (whose prime minister accused Israel of being motivated by elections and demanded that Israel be “held to account” for mounting civilians deaths), Egypt (which denounced Israeli attacks as “aggression against humanity”), and Tunisia (which called on the world to “stop the blatant aggression” of Israel).

By rather stark contrast, Obama continues to defend Israel’s free hand in Gaza, causing commentators like Jeffrey Goldberg to gloat, not inaccurately: “Barack Obama hasn’t turned against Israel. This is a big surprise to everyone who has not paid attention for the last four years” (indeed, there are few more compelling signs of how dumb and misleading US elections are than the fact that the only criticism of Obama on Israel heard over the last year in the two-party debate was the grievance that Obama evinces insufficient fealty – rather than excessive fealty – to the Israeli government). That the Netanyahu government knows that any attempt to condemn Israel at the UN would be instantly blocked by the US is a major factor enabling them to continue however they wish. And, of course, the bombs, planes and tanks they are using are subsidized, in substantial part, by the US taxpayer.

If one wants to defend US support for Israel on the merits – on the ground that this escalating Israeli aggression against a helpless population is just and warranted – then one should do so. As I wrote on Thursday, it’s very difficult to see how those who have cheered for Obama’s foreign policy could do anything but cheer for Israeli militarism, as they are grounded in the same premises.

But pretending that the US – and the Obama administration – bear no responsibility for what is taking place is sheer self-delusion, total fiction. It has long been the case that the central enabling fact in Israeli lawlessness and aggression is blind US support, and that continues, more than ever, to be the case under the presidency of the 2009 Nobel Peace Prize winner.

The US is not some neutral, uninvolved party. Whatever side of this conflict you want to defend – or if you’re one of those people who love to announce that you just wish the whole thing would go away – it’s still necessary to take responsibility for the key role played by the American government and this administration in enabling everything that is taking place.

Due to extensive travel the past few days, I’ve been subjected to far more television news coverage than is probably healthy, and it’s just been staggering to see how tilted US media discourse is: Israeli officials and pro-Israel “experts” are endlessly paraded across the screen while Palestinian voices are exceedingly rare; the fact of the 45-year-old brutal occupation and ongoing Israeli dominion over Gaza is barely mentioned; meanwhile, every primitive rocket that falls harmlessly near Israeli soil is trumpeted with screaming headlines while the carnage and terror in Gaza is mentioned, if at all, as an afterthought. Two cartoons perfectly summarize this coverage: here and here.

On a related note, the Nation’s Jeremy Scahill was interviewed on Tuesday night after a Sundance Institute panel on political documentaries which I moderated. Scahill, who is working on a documentary entitled “Dirty Wars” about the US violence in Yemen and other parts of the Muslim world, spoke for 12 minutes to We Are Change about Obama’s terrorism and foreign policies; I highly recommend it:

According to Haaretz, Israel’s Interior Minister, Eli Yishai, said this about Israel’s attacks on Gaza: “The goal of the operation is to send Gaza back to the Middle Ages.” Let me know if any of the US Sunday talk shows mention that tomorrow during their discussions of this “operation”.