We condemn Israel. So why the silence on Syria? | 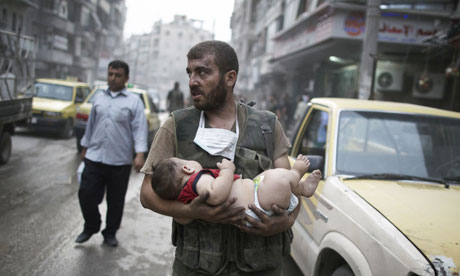 A Free Syrian Army fighter carries a baby, the only survivor in his family after an artillery round destroyed his home in Aleppo this month. Photograph: Sipa USA/Rex Features

When Israelis kill Arabs there is outrage. But Assad’s brutal campaign has cost 30,000 lives and there’ve been no protests

We know the government hopes to do nothing, but what about the rest of us? Exactly one year after the death of Muammar Gaddafi, the chances of another round of Libya-style western military intervention, this time for Syria, hover close to zero. Even the hawkish Mitt Romney promises no such thing. Few politicians speak even of non-military options – of which there are many – let alone taking up arms.

They say nothing because there is no pressure on them to say anything. Here and abroad, there is virtual silence, save for the desperate pleas of a few Syrian expats and yesterday’s cry for humanitarian help from the Turkish foreign minister. We know the facts, and we know what Bashar al-Assad has done since demonstrators took to the streets to protest against his rule 19 months ago. He and his forces have pursued a campaign of the most chilling brutality, using fighter planes to bomb civilian neighbourhoods, capturing, starving and torturing children as young as six, according to Save the Children, and racking up an estimated death toll of 30,000 victims.

People know all this but stay mute. Not that they should be demanding immediate military action. After Afghanistan, Iraq and Libya, people are justifiably both weary and wary, with many regarding action in Syria as a practical impossibility. I understand that. But what I can’t comprehend is the lack of public pressure on those doing the actual killing – starting with the Assad regime. Instead, public opinion seems utterly disengaged, unbothered by the slaughter under way in Aleppo, Homs and Damascus.

There are no mass demonstrations outside the Syrian embassy in London. The story is rarely on the front page or on the TV bulletins. Even when there is a shocking atrocity, such as the Daraya massacre of up to 400 people in August, it makes only a fleeting impact. There is no Disaster Emergency Committee appeal. At the Labour party conference, there were fringe meetings on every possible subject, from teenage spending habits to domestic pets. But there was not a single session focused solely on Syria – and this in the party that calls itself internationalist.

It’s not as if this is par for the course, that we never get exercised by the loss of innocent life in the Middle East. We do. Nearly four years ago Israel launched Operation Cast Lead, designed to halt Hamas rocket fire from Gaza. It resulted in some 1,400 Palestinian deaths. For nearly a month that story was never off the front page, and it often led the TV news, here and around the world. There were large and loud public demonstrations. The DEC set up a fund and sought to air a televised appeal, famously refused by the BBC.

There is no such clamour now. The Stop the War Coalition is not summoning thousands to central London to demand an end to the fighting, as it did then. On the contrary, its statements are content simply to oppose western intervention – of which there is next to no prospect – while politely refusing to condemn Assad’s war on his own people. Caryl Churchill has not written a new play, Seven Syrian Children, exploring the curious mindset of the Alawite people that makes them capable of such horrors, the way she rushed to the stage to probe the Jewish psyche in 2009. The slaughter in Syria has similarly failed to move the poet Tom Paulin to pick up his pen. Apparently, these Syrian deaths are not worthy of artistic note. The contrast has struck Robert Fisk, no defender of Israel. He puts it baldly: “[T]he message that goes out is simple: we demand justice and the right to life for Arabs if they are butchered by the west and its Israeli allies, but not when they are being butchered by their fellow Arabs.”

Plenty resist that explanation. Some say the lethargy of both the public and anti-war left is due to the fact that Syria is now locked in a civil conflict, making it hard to tell good guys from bad guys. Yet NGOs were swamped with cash donations during the Kosovo crisis: the public did not write that off as a mere internal Balkan problem. Besides, though it’s a civil war now, with both sides armed, for several months it was much more straightforward: peaceful demonstrators killed in cold blood. Yet few rallied to the Syrian people’s cause then either.

Others wonder if Gaza in 2008-9 stirred greater outrage because it was such an intense episode, unfolding in a matter of weeks, while Syria has been a drip-drip horror story played out over nearly two years. But this hardly stacks up. Awful to speak in such terms, but the killing rate has been more, not less, intense in Syria: witness that massacre of 400 in a single day.

Anxious for answers, I called Lindsey German of Stop the War, who told me the organisation was not active on Syria because that “isn’t Stop the War’s job”. Its focus is on what “Britain and the US are doing”. Why, then, was it so vocal on Gaza? Because the west “was very much in support of the Israelis, so it was very different”. (In fact, Britain did not support Operation Cast Lead but called for a ceasefire.) She adds that the Palestinian question “has its own dynamic, which isn’t true of any other country”.

The trouble is, such thinking surely leads to a very parochial form of internationalism – turning a blind eye to all those areas of the globe where one’s own government is not involved. And that’s if such a rule were applied consistently – which it is not.

The last argument is a variation on the civil war one: Syria is now mired in a viciously sectarian conflict, Alawites and their allies against Sunnis and the rest, which makes it impossible for outsiders to take sides. But such logic rapidly falls into the moral hole identified by Fisk, in which a Muslim death matters less when the killer is a fellow Muslim.

Of course we reserve a special kind of outrage for the targeting of one ethnic group by another. Yet there is a risk here. It’s not simply a bias against Jews that regards an Arab or Muslim death as only deserving condemnation when Israel is responsible. It is demeaning of Arabs and Muslims themselves – implying that when members of those groups kill each other it somehow carries little moral weight. Such a view is not defensible, especially among those who would consider themselves to be enlightened or progressive. Every life has equal worth, no matter who’s doing the dying – or who’s doing the killing.

• Comments on this article will be launched on Saturday morning

Greg Palast on “Billionaires & Ballot Bandits: How to Steal an Election in 9 Easy Steps”