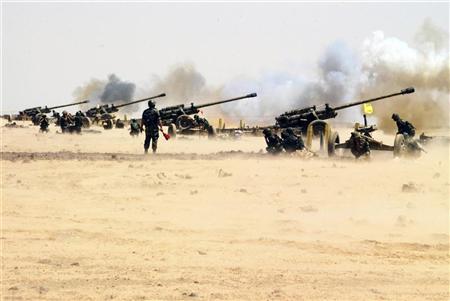 (Reuters) – Iran has been using civilian aircraft to fly military personnel and large quantities of weapons across Iraqi airspace to Syria to aid President Bashar al-Assad in his attempt to crush an 18-month uprising against his government, according to a Western intelligence report seen by Reuters.

Earlier this month, U.S. officials said they were questioning Iraq about Iranian flights in Iraqi airspace suspected of ferrying arms to Assad, a staunch Iranian ally. On Wednesday, U.S. Senator John Kerry threatened to review U.S. aid to Baghdad if it does not halt such overflights.

Iraq says it does not allow the passage of any weapons through its airspace. But the intelligence report obtained by Reuters says Iranian weapons have been flowing into Syria via Iraq in large quantities. Such transfers, the report says, are organized by the Islamic Revolutionary Guard Corps.

“This is part of a revised Iranian modus operandi that U.S. officials have only recently addressed publicly, following previous statements to the contrary,” said the report, a copy of which was provided by a U.N. diplomatic source.

“It also flies in the face of declarations by Iraqi officials,” it said. “Planes are flying from Iran to Syria via Iraq on an almost daily basis, carrying IRGC (Iranian Revolutionary Guard Corps) personnel and tens of tons of weapons to arm the Syrian security forces and militias fighting against the rebels.”

Although the specific charges about Iraq allowing Iran to transfer arms to Damascus are not new, the intelligence report alleges that the extent of such shipments is far greater than has been publicly acknowledged, and much more systematic, thanks to an agreement between senior Iraqi and Iranian officials.

“Iraq rejects baseless allegations that it allows Iran to use its airspace to ship arms to Syria,” he said. “The prime minister has always called for a peaceful solution to the Syrian conflict and … the need for a ban on any state interfering in Syria whether by sending arms or helping others to do so.”

The issue of Iranian arms shipments to Syria came up repeatedly at a Senate hearing in Washington on Wednesday on the nomination of Robert Beecroft as the next U.S. ambassador to Baghdad. Beecroft is currently deputy chief of mission there.

John Kerry, the Democratic chair of the Senate Foreign Relations Committee, asked Beecroft what the embassy was doing to persuade the Iraqis to prevent Iran from using their airspace for flights carrying weapons to Syria. Beecroft said that he and other U.S. officials made clear to Iraq the flights must stop.

Kerry said he was alarmed that U.S. efforts thus far had not persuaded Baghdad to halt the overflights, and suggested that the United States could in future make some of the hundreds of millions of dollars in assistance it gives to Iraq contingent on their cooperation on Syria.

“Maybe we should make some of our assistance or some of our support contingent on some kind of appropriate response,” he said. “It just seems completely inappropriate that we’re trying to help build democracy, support them, put American lives on the line, money into the country, and they’re working against our interest so overtly.”

The intelligence report, which Western diplomats said was credible and consistent with their information, said Iran had cut a deal with Iraq to use its airspace.

One envoy said it was possible that Tehran and Baghdad did not in fact have any formal agreement, but only an informal understanding not to raise questions about possible arms transfers to Syria.

In comments published by Iranian media on Sunday, IRGC commander-in-chief Mohammad Ali Jafari said members of the force were providing non-military assistance in Syria and Lebanon. He added that Tehran might get involved militarily in Syria if its closest ally came under attack. A day later, however, Iran’s Foreign Ministry denied those remarks.

Two Boeing 747 aircraft specifically mentioned in the intelligence report as being involved in Syria arms transfers – an Iran Air plane with the tail number EP-ICD and Mahan Air’s EP-MNE – were among 117 aircraft hit with sanctions on Wednesday by the U.S. Treasury Department.

The Treasury Department also blacklisted aircraft operated by Iran’s Yas Air for supplying Syria with weapons. A U.N. panel of experts that monitors compliance with U.N. sanctions against Iran has repeatedly named Yas Air, along with Iran Air, as a supplier of arms to Syria.

The Treasury Department statement on the new blacklistings said the move would “make it easier for interested parties to keep track of this blocked property, and more difficult for Iran to use deceptive practices to try to evade sanctions.”

The statement did not mention Iraq.

Earlier this year, the U.N. panel of experts recommended that Yas Air be put on the U.N. blacklist for helping Iran skirt a U.N. arms embargo. So far the Security Council has not taken any action on that recommendation.

The U.N. panel’s reports have described Iranian arms shipments to Syria via Turkey, not Iraq.

The intelligence report said such transfers across Turkish airspace had ceased.

“Since Ankara adopted a firm position against Syria, and declared that it would intercept all weapons shipments sent to the Assad regime through Turkish territory or airspace, Tehran has all but completely stopped using this channel,” it said.

Tehran is forbidden from selling weapons under a U.N. arms embargo, which is part of broader sanctions against Iran over its nuclear program.

Earlier this month, U.N. Secretary-General Ban Ki-moon said Syria’s conflict had taken a brutal turn with other countries arming both sides, spreading misery and risking “unintended consequences as the fighting intensifies and spreads.

The battle for Syria

Minutes after Newsweek posted a picture of its upcoming cover story about “Muslim Rage,” Muslims and others began mocking it with the hashtag #MuslimRage. Curated by Alex Fitzpatrick.Newsweek’s cover story, titled “Muslim Rage: How I Survived It, How We Can End It,” in part examines the passionate and occasionally violent protests over a controversial anti-Islam YouTube video that have been spreading throughout Muslim communities.

SALT LAKE CITY—Seeking to limit the fallout from a videotaped speech in which he asserts 47 percent of Americans “pay no taxes” and do not take “personal responsibility and care for their lives,” Mitt Romney hastily called a press conference today to apologize personally to the “150 million starving, filthy beggars [he] might have offended.”

Saying that he deeply regretted his choice of words at a private $50,000-a-plate fundraising function in May—during which he argued “[his] job is not to worry” about the lower-earning half of the nation’s populace—Romney personally appealed to the country’s “dirt-caked garbage pickers and toothless street urchins” for forgiveness.

“First and foremost, I would like to offer a heartfelt apology to all the whores, junkies, bums, and grime-covered derelicts out there who make up nearly half our nation,” a visibly contrite and solemn Romney said outside a campaign stop at a local high school. “Let me assure you that I in no way meant to offend any of the putrid-smelling, barefoot masses out there. My campaign is not about dividing this nation, but about bringing all sides together—the rich, elegant members of the upper class, as well as the 47 percent who are covered in flies and eat directly from back-alley dumpsters.”

“I am fully committed to building a better future for every American,” Romney continued, “and that means ensuring all 150 million grease-and-urine-soaked members of our society get a fair shake.”

The Romney campaign reportedly scrambled into damage-control mode after the video leaked Monday, issuing a statement late last night stating that the intended target of Romney’s remarks was ingrained big-government largesse, not the “hordes of uneducated, loathsome scum who unfortunately populate this country.”

However, with Romney’s comments continuing to dominate the news cycle today, the campaign opted to convene a press event to allow Romney to speak directly to the nation’s “grimy panhandlers and coke-addled whores” so that he could issue an apology and explain his familiarity with their struggles.

“I know just how hard it must be to get through a miserable, destitute life that is rife with crying babies whose shrieks consistently disrupt the affluent members of society who actually contribute something to this world,” said the GOP candidate, adding that he wanted to make amends for his recent statements and reach out to what he called the country’s “snaggle-toothed street people” and “hell-spawned savages.” “I know it can be challenging to wake each morning, covered in your own feces and refuse, and get back out there on the streets to beg for spare change and food scraps, always one step from dying right there in an alley.”

“I know your challenges, and I am ready to fight for you,” he added

Romney also said he recognized that the hardships of the nation’s low-earners are made more difficult by the fact that so “very, very many of them are drug-addicted, high-school-dropout single mothers and fathers who sleep in gutters while sewer rats nibble at their necrotic flesh.”

In an effort to right his campaign and rebuild his image, Romney promised to bring his message of compassion and economic opportunity to the “ramshackle, mud-floored huts” in which half of all U.S. residents live.

“Let me make this absolutely clear: I have the utmost respect for all of the filth-encrusted, lesion-covered degenerates of this nation,” Romney said. “In the coming weeks, I look forward to meeting real Americans in their squalid, roach-infested hellholes in every corner of this country. I promise to stand up for every one of you, even the 47 percent of you huddled together for warmth, fighting your own family members for moldy crusts of bread as you wallow in your own excrement.”

Added Romney, “And I look forward to serving you as your next president.”