A documentary of the decline of America. It features a lot a footage (most exclusive to this film) from race riots to serial killers and much-much more. While this documentary is easily available everywhere else, it has never been released, distributed, televised nor made available for sale in the USA. This documentary argues that the turning point was when John Kennedy was assassinated in Texas 1963 combined with poverty, racism, the Vietnam war, and gun violence but unlike Michael Moores heavy handed 2002 documentary “Bowling for Columbine” (Which is often compared to this documentary) this film never becomes preachy nor does it blame guns in the same way.

Iran steps up crackdown against its Arab minority 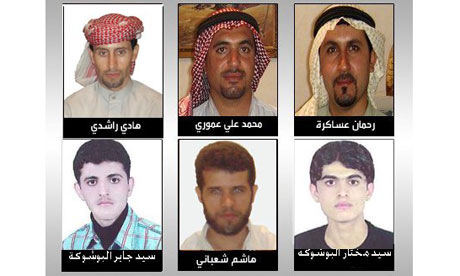 Iran has stepped up its crackdown against its Arab minority with mass arrests of activists and death sentences passed in closed-door courts.

At least five Arab prisoners who are currently kept at Karoun prison in the southern city of Ahwaz are at imminent risk of execution, activists have warned.

According to Human Rights Watch, the five were arrested by security forces in February 2011.

They have all been found guilty of being linked to a terrorist organisation and involvement in shootings that authorities say occurred in and around the town of Ramshir (also known as Khalafabad) in Khuzestan province.

“The judiciary has put forth no public evidence suggesting that these men should spend one more day in prison, let alone hang from the gallows,” said Sarah Leah Whitson, Middle East director at Human Rights Watch. “The lack of transparency surrounding these men’s convictions and sentences is just one more reason why these execution orders should be quashed.”

Ahwazi Arabs in Iran often face state discrimination in spheres including education, employment politics and culture. In recent years, many members of the community have taken to the streets to protest at the discrimination against them. Groups advocating a separate Arab state have also been demonstrating, but not all protesters have been separatists.

In June, three members of Iran’s Ahwazi Arab minority, Abd al-Rahman Heidarian, Taha Heidarian and Jamshid Heidarian, were executed in connection with killing of a law enforcement official. The activists said the charges might have been trumped up and politically motivated because of the secrecy surrounding their trials and the fact that they have had poor legal representation.

Several other Arab activists have also been arrested in recent years and sentenced to lengthy prison terms, including Rahman Asakereh, 34, who has been sentenced to 20 years and Esmaeel Abiat, 29, who has received five years in jail. Ali Badri, 31, has got 6 years, and Shahid Amouri, 42, one year, according to Human Rights Watch.

“The source told Human Rights Watch that the nine men are among at least a dozen Iranian-Arab activists from Khalafabad arrested by security forces since February 2011,” the HRW said. “Authorities have since released several others on bail, but Human Rights Watch has no specific information regarding the status of their cases.”

In the face of recent crackdowns, Justice for Iran, a non-profit human rights organisation, has called on the European Union to impose sanction on Iranian officials involved in the persecution of the country’s Arab minority.

The group has accused Morteza Kiasati and Seyed Mohamad Bagher Moussavi of Ahwaz’s revolutionary court of being responsible for the persecutions against the minority. Justice for Iran also pointed its finger at Iran’s state-run English language television, Press TV, for broadcasting the “force false confessions” of the men on television.

“January and February 2012 saw the start of a wave of arrests of Arab activists in Iran,” said Justice for Iran. “In the city of Shush alone, agents of the Ministry of Intelligence arrested over 30 people who were actively supporting and advertising the boycotting of the March 2012 parliamentary elections.”

It added: “Shortly after these arrests, which resulted in the detention of over 60 people in the province of Khuzestan, sources close to the families of some of the detainees reported that at least two of the protesters were killed under torture while in custody at the detention centres.”