Rima Dali protesting in front of the Syrian Parliament building

Rima Dali was arrested in front of the Syrian Parliament building in Damascus for daring to hold this sign: “Stop the killing! We want to build a nation for all Syrians!”

She has been released few hours ago by the judge. No charges were filed against her.

Peace, Propaganda and the Promised Land

Rick Steves watched Peace, Propaganda, and the Promised Land and had an epiphany, he has seen the light.

If you happen to be one of the 3.5 people in America who have never heard of Rick Steves watch this 60 Minute episode. He’s huge, the only famous American tour guide.

He’s got a popular TV show , hosts NPR Travel with Rick Steves, and has a 20-million-dollar-a-year business selling travel books. Can’t get much more mainstream than that. He’s the all-American boy (that’s how he strikes this California girl anyway).

So imagine my surprise when I read his recent article on Huffington Post,  Reflections on Israel and Palestine.

Do you know the frustration you feel when you believed in something strongly and then you realize that the information that made you believe was from a source with an agenda to deceive?

I just watched a powerful and courageous documentary called Peace, Propaganda, and the Promised Land. It certainly has its own agenda and doesn’t present balanced coverage. Still, it showed me how my understanding of the struggles in the Middle East has been skewed by most of our mainstream media. I saw how coverage of the Israeli/Palestinian problem is brilliantly controlled and shaped. I pride myself in understanding how the media works… and I find I’ve been bamboozled….

In my view, many Palestinians live under inhumane conditions, and U.S. taxpayers help to make it happen. Please, watch this and then share your impressions. Criticism of Israel’s policies is not automatically anti-Semitic (see J-Street for an example of a pro-Israel, pro-peace group). In fact, the irony is that for Israel’s hard-liners, their clever PR strategy could be their own worst enemy. While Israel certainly deserves security on its land, the Israeli occupation of Palestinian territory (in Gaza and the West Bank) degrades Israel and drives Palestinians to desperation. The question of whether Israel is conducting a brutal military occupation or a reasonable defense against terrorism gets no real airtime. If we care about the long-term security of Israel, we have a responsibility to understand what our government is funding and supporting.

Peace, Propaganda, and the Promised Land is a fantastic important film and Steves has a huge following.

Here’s Rick Steves at the Temple Mount. Or watch the full episode on Hulu.

GERMANS ARE BEHIND GÜNTER GRASS 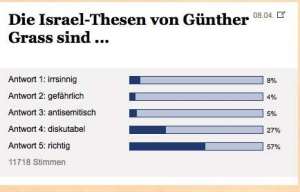 Günter Grass´ take on Israel is..

Seemingly the Germans have drawn the necessary lesson from the big war. They oppose war, expansionism and militancy. But what about the Israelis, will they ever learn?