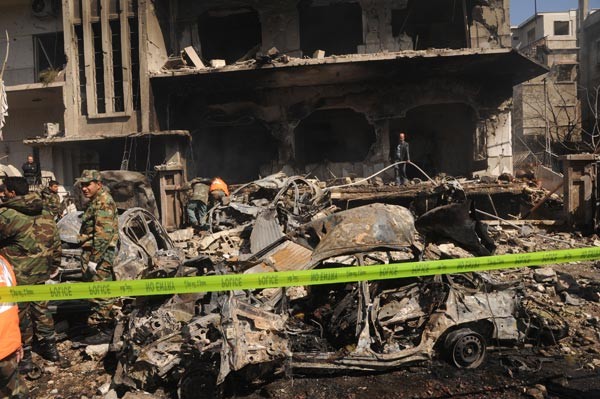 We as activists outside of Syria have been busy since the uprising, campaigning governments, organizing protests, speaking to media, raising awareness, providing support to the revolution on the inside (even if at times it’s been only moral support), activities that run the gamut to keep the revolution alive.

Over a year on – the world knows, protests in countries have dissipated due to local law enforcement’s short temper, media have established contacts on the inside and support – well support is always needed even if it’s just moral.

Now our role, as activists outside of Syria, has changed, like the revolution has changed. As it’s become increasingly more violent and situations spin helplessly out of control on the ground – expat activists have turned into the bullhorn for activists on the inside.  Through a network of confirmations and connections information is readily churned out for external consumption – attempting to always keep Syria at the top of the news cycle. We slowly run the risk of sounding redundant.

So what else can we do?

Now is the time to think big and start small. We have what other revolutions didn’t have. The horrible curse of having time. The regime may be on its last leg, but the revolution is not ending anytime soon. We have this time to think strategy, to think Post-Assad. It is a fact the regime will fall and when it does, in its wake will be left a disaster.

As there were no international forces around during the destruction, there will be no one around to pick up the pieces.

Our roles will have to change to suit, once again, the realities on the ground.

Regardless of what the future Syria government looks like, the needs of the people will be immediate and there is no reasonable expectation from an interim government to provide all the assistance needed.  What we really need is to unite our own efforts, as activists with the most know-how of our country, and start early.

What we really need is damage control.