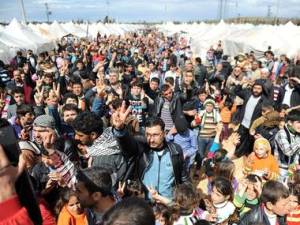 Mona flinches each time she hears a bang in the chaotic refuge in the Lebanese mountains that has been her home for a week. The five-year-old wears several layers of baggy, boys’ clothes and clutches a ragged, blue bear. “I always get scared. My father is in Syria so I worry a lot about him,” she says. Bed-wetting and terrorised wails are nightly features of the lives of the 30 children who fled Homs and Qusayr, a nearby village, with their five mothers in two convoys last week.

Some of the children are boisterous and grapple for attention. Others sit in silence, their eyes dart around and their heads jolt each time the louder ones clap or smack the floor. Others sit in the centre of the room, frenziedly banging the carpet and imitating the chant leaders so familiar in videos of Syria’s protests.

“I know what they say at the demonstrations,” shouts Mona. In perfect unison they sing a chant about the revolutionaries of every Syrian town: “In Latakia they are safe, thank God; in Homs are the brave.” Each new rhyme they recite is more sinister – calling for the Shabiha, the regime’s militias, and Bashar al-Assad, to be hanged, for Muammar Gaddafi’s fate to befall them. The children belt out the words with a tragic glee. “We will not sleep until the ass steps aside,” cries 11-year-old Ala. When he grows up he insists he will be “the great leader of the revolution”.

Mona wants to become a doctor to help the wounded. “I was shot in the back,” she shouts, clasping a hand over her spine. She lifts her top to reveal her back is unscathed and giggles. The family says she wants to be like her mother, who has shrapnel from mortars lodged in her arm. They gather around a cast iron heater in the snow-capped mountain town. All live in three rooms, housed by a local NGO called the Islamic Group.

The assault on Homs and Qusayr intensified two months ago. When the breaks between the children’s screams narrowed and shrapnel burst in through the windows, five families decided to flee. They left the two neighbouring towns for the Baalbek mountains in Lebanon, smuggled across by those they describe as “good people”.

“We changed cars every six minutes,” says Ala. His mother says it was every 15, during a three-hour, 100km journey. Men who intimately knew their patch and the sniper positions bundled the children into a desperate relay of vehicles until they reached safety. The men stayed behind to defend the town. During a break in the bombardment the women packed a few possessions and left. Nearby buildings had been gutted by blasts and it was only a matter of time before their homes would be hit.

For months the children had not dared to go outside. Their homes were often immersed in total darkness as the electricity failed. They lived off meagre rations from last year’s harvest and had limited supplies of water as shells had hit the tanks on the roofs.

“Even if the children can escape the country, they often can’t escape the conflict and the fear it creates,” says Andrew Wander, emergencies media manager at Save the Children. His organisation is scrambling to create projects to support the vast influx of children into countries bordering Syria. Some of the children have been orphaned; others have only one parent left.

Two of the children in the crammed Baalbek home have a rare condition they call sumak – or fish – because it turns skin grey and scaly. It is an extreme form of psoriasis that has been left untreated for months. Ala, one of the sufferers, is prematurely aged, his raw and angry skin stretched over his bones. He perpetually forces a smile through cracked skin, but his face falls when he believes no one is looking. Every medical facility had closed in Qusayr, and Lebanese doctors are unsure what to prescribe – they have never seen such a severe case. He has the gravelled and wizened voice of an old man: “In Syria life is miserable,” he says.

“We know the children here in Lebanon are just the tip of the iceberg; there are many still in Syria and to get to them we need full humanitarian access,” says Mr Wander, who is desperate for the Syrian government to permit the creation of an aid corridor to reach those most in need.

Ala’s older brother, 14-year-old Mohammed, sits sullenly disengaged in the corner. He only looks up when the homeowner says he is unsure how long he can host them. It is clear he feels the burden of responsibility for his sprawling family, catapulted into this position by the grim turn of events. When questioned Mohammed gives curt, often untrue, answers. Asked if he joined the demonstrations, he says he did not. But his mother, 42-year-old Tfaha, says: “He did, he went every day – I encouraged him.”

Mohammed later admits he would like to join the Free Syrian Army. Would he not be scared? “No, I’d know I was defending our honour and our country.”

“If they had enough weapons we would all join,” says Tfaha.

Syria’s First Couple and the Banality of E-Mail

Updated | 5:43 p.m. As Syrians mark the first anniversary of the uprising against President Bashar al-Assad on Thursday — with government-orchestrated rallies of support broadcast live on state television and furtive messages promising continued defiance posted on YouTube — exiles trying to make sense of the conflict from afar have been eagerly reading a cache of e-mails, said to be the private correspondence of the regime’s first couple, provided to The Guardian by opposition activists.

While The Guardian remains open to the possibility that some of the e-mails intercepted by the activists are fake, Britain’s former ambassador to Syria confirmed that two messages from him were genuine. The newspaper adds: “The cache of 3,000 e-mails passed on by a source in the Syrian opposition reveals a wealth of private information — including family photographs and videos, a scan of the president’s identity card and a birth certificate belonging to a family member — that would be difficult for even the best resourced hoaxer or intelligence agency to gather or fabricate.”

If the e-mails are genuine, there are potentially serious revelations in the trove, including what appears to be evidence that the president took advice from Iran on how to handle the crackdown on dissent. Even so, activists, bloggers and journalists scouring the messages published by The Guardian so far have largely focused on the trivial nature of the messages — the links tofunny YouTube clips, the songs purchased from iTunes — which seem to reveal that, even in the middle of a bloody campaign to crush a protest movement, the president and his wife are still, at heart, a British-educated doctor who was never supposed to lead his country, and the British-born former investment banker he married.