The Jews Go To War (With Themselves)

On 12 December 2011 hundreds of Israeli settler fanatics besieged a West Bank IDF army base. They destroyed equipment, set fires, and even stoned the base soldiers. This was the second such attack in a month. The cause? Anger over the army’s dismantlement of a small number of isolated, unauthorized settler outposts. The Chief of the Central Command of the Israel “Defense” Forces, Major General Avi Misrahi, is quoted as saying “I have not seen such hatred of Jews towards soldiers during my 30 years of service.” He must not have been looking. 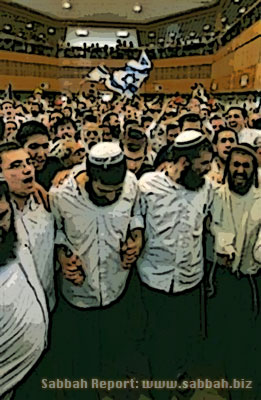 This an exceptional event. The subsequent indignation over the attack expressed by Prime Minister Netanyahu (“red lines have been crossed”) was, as Alex Fishman writing in Yedioth Ahronoth put it, staged hypocrisy. The Prime Minister is certainly aware that for some time there has been on-going skirmishing between the settlers and government security forces. Right wing settlers regularly throw rocks and fire bombs at police and army vehicles and “physical altercations” between settlers and Israeli police and soldiers are “almost routine.” This is so despite the fact that the government, both Prime Minister and Knesset, “either tacitly or openly” support the settlers. Then why the hatred and why the attacks?

At this stage the battle is over strategy. The Israeli government wants to gobble up all of Palestine in an orderly step by step fashion. In part, this is to avoid too much international criticism at any particular stage of the process. On the other hand, the settlers don’t give a damn about international opinion – no more than does al-Qaeda, to which they have an unsavory resemblance. Led “by fundamentalist religious leaders who do not recognize the state of Israel and its laws,” they are driven by religious fanaticism and have no respect for governments or their agents. It is their ideological conviction that all of Palestine (including, by the way, Jordan) must be Jewish as soon as possible. The authorities sometime get in the way of this goal and that has led the settlers to, as Fishman puts it, “terrorize not only the Palestinian population but also the police and the army.”

Prime Minister Netanyahu, belatedly noticing an erosion of government authority, has begun to set rules against settler violence when it is directed toward the IDF and police (but not toward the Palestinians). The New York Times reports that from now on such “radical Israelis” attacking soldiers or policemen will be treated just like “Palestinian militants.” That is they will be “detained for long periods without charge and tried in military courts.”

Alas, this new toughness won’t work. For years Israeli governments have looked the other way as thousands of armed religious fanatics organized themselves and got stronger and more self-assured. Now, as Adam Keller of Gush Shalom tells us, “the Golem has turned on its creator.” These are the people who assassinated Yitzhak Rabin. What makes Netanyahu believe that Israel’s present army, police and courts which, reminiscent of the Weimar Republic, regularly show sympathy and leniency toward these criminals, are going to change their attitude on his orders? When a military reporter asked a brigade commander if he was prepared to act toward settler hostility in the same manner as he would Palestinian hostility, he answered “you would not expect me to open fire on a Jew…I am certain you didn’t mean that.”

The reporter would have gotten a very different answer if she had asked the fanatic settlers about how far they were willing to go. Anshel Pfeffer writing in the Israeli newspaper Haaretz notes that “the only red line that has yet to be crossed is a scenario in which an Israeli citizen [belonging to] the extreme settler right would open fire on IDF soldiers. There are those in Israel’s security forces who fear that day is not so distant.”

Netanyahu’s apparent change of heart comes too late. What we have here is incipient civil war. Any really serious effort to stop these fanatics will result in their turning their weapons on those who represent the government. What you sow is what you reap.