Immaturity as an origin of evil

Bashar al-Assad as a case study. 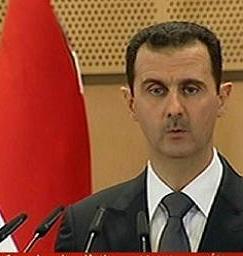 In my answer to the National Initiative for Change, which was based on the premise that Bashar would resign shortly after the start of the demonstrations, I explained to them that won’t happen and the war with the regime will take many months. I based my judgement on my personal assessment on the real situation in Syria and also on my personal knowledge of Bashar’s personality, which is mainly characterized by his immaturity.  The question that many may ask is how personal immaturity can lead a person to lose his or her conscience, committing crimes and consequently destroying himself and many people around him.

One important characteristic of mature people is that they have good sense of the reality. That means they are able to understand themselves and their environment in a proper way. Indeed, they understand that human beings grow psychologically in a way similar to way with which they grow physically. Each stage of life has its real psychological needs. These psychological needs need to be fulfilled in order the person to mature and grow in a healthy way. While in the early stages of life it is the responsibility of our parents to help us fulfill our needs, in the later stages of life it is our responsibility to find the way to fulfill these needs. Further, mature people can understand their strength and weakness. Thus, they try to develop further their strength and correct their weaknesses. Also, they can understand the life choices that present themselves to them and accept the ones that fit their personality and reject the ones that are not suitable to their personality. Plus, this understanding of own-self provides mature persons the capacity to understand people around them, thus they can distinguish other people’s real needs from their unreal needs and consequently fulfill for them the real ones only while being firm rejecting the unreal ones. Finally, mature people have good understanding for the laws that govern human relationships and interaction. Therefore, they can adapt properly to complex social realties and lead life events to the best outcome for them and for the people around them.

I knew Bashar when I was at medical school. Bashar at that time looked very nice and modest. Further, he looked happy or rather he used to joke all the time. This character used to provide people a sense of comfort, because they felt they are in the presence of the son of the president but they did not have to be formal. However, when I now look back at his behaviour, I can see the early signs of his immaturity. Indeed, his relationships with people were superficial. He had a lot of people around him but not real friends. However, he needed real relationships in order to mature and grow. Further, his jokes were some kinds of superficial fun rather than jokes come arise from an actual situation or reflect wit and intelligence. Indeed, Bashar was disconnected from reality of his own self and the world around him and his nice and fun personality was an escapade from the real world.

I formulated my above-mentioned interpretation of Bashar’s personality from the ideas that acquired through studying the course of his presidency and linking them to the old memories that I have about him. Indeed, let us look at the course of his presidency. Bashar started his presidency with his famous first inaugural speech. In his famous inaugural speech, Bashar promised reforms. However, ten years later he came to say that he was unable to do any of these reforms, because of the hard circumstances. Indeed, Bashar was not able to do these reforms, because has an inherent handicap in his personality that arises his indecisiveness and his pervasive sense of powerlessness. Another event in Bashar’s presidency was the Damascus spring. When Bashar permitted the forums to start, he did not understand the people’s need for freedom of speech and intellectual exchanges. He did not understand the effect of many decades of suppression of free speech. He did not understand that he and the people around him lacked the intellectual acumen that permits to them to keep up with the ideas that may arise from these forums. He thought that he was providing candies, and they should be happy with. Thus, when these forums propagated like mushrooms and the regime’s men were not able to keep up with the ideas arising from these forums, Bashar closed these forums abruptly even putting some participants in prison. That did not only create disappointment among the Syrian intellectuals, but also pain and bitterness. Another big mistake that Bashar did was mixing up the state business with the family business. The archexample of this was offering the monopoly of the mobile phone business to his cousin (Rami Makhlouf), thus provoking the Damascene businessmen and breaking the implicit agreement that Hafez al-Assad made with them. All that resulted in putting Riad Saif and Maamoun al-Homsi in prison on false charges, thus provoking pain and bitterness among the traditional Damascene business class. All the above-mentioned examples reflect Bashar’s inability to understand and deal with complex realities. However, I found that the most shocking example of his negative emotions and disconnection with the reality was his first speech after the uprising started during which he was smiling all the time, while people were dying in the street. This smile reminded me his naïve immature smile when he was young and how it has transformed into a silly wicked smile when he got older, demonstrating how immaturity lead into evil.

All the above-mentioned reflect how complex situations, such as the presidency, could shatter the psychological underpinning of immature naïve people, apparently modest and nice, transforming them into ruthless rulers, committing atrocious crimes. Further, it makes us question the wisdom of the father, Hafez al-Assad, who may be by wishing being eternal Bashar and despite the advices that were offered to him to do not do so, inherited his throne to inapt son, thus casting a curse upon him.

“Blood on the Tracks”: Brian Willson’s Memoir of Transformation from Vietnam Vet to Radical Pacifist

Today we spend the hour with a man who put his life on the line twice: once when he served in the Vietnam War and again when he came back. On September 1, 1987, Brian Willson took part in a nonviolent political action outside the Concord Naval Weapons Station in California. He sat down on the train tracks along with two other veterans to try to stop a U.S. government munitions train sending weapons to Central America during the time of the Contra wars. The train didn’t stop.