Tunis : the return of Ben Ali

Congratulations are due to the Hamas movement for the successful conclusion of the process set in motion when its operatives captured a soldier of the Zionist occupation in June 2006. On October 18th 2011 the enemy soldier was returned to his commanders after Israeli authorities agreed to release 1027 Palestinian hostages.

It wasn’t easy to arrive at this point. Over 400 Palestinians were killed by Zionist rampages in Gaza shortly after the capture of the terrorist (and thousands more have been murdered since). In July 2006 Hizbullah sought to take the heat off Gaza and at the same time to ensure the release of Lebanese hostages by capturing Israeli terrorists on the Lebanese border. Israel responded by launching a full scale assault on the civilians of Lebanon. Over 1000 Lebanese were killed – but Israel received an unexpected bloody nose. It aimed to finish Hizbullah off; instead Israeli cities and military installations came under rocket attack, Israeli soldiers failed to move beyond the Lebanese border villages, and Hizbullah was strengthened. In 2008 the Lebanese hostages were exchanged for the captured Israeli terrorists. Israel’s defeat in 2006 shifted the balance of power, and the current prisoner deal also shifts the balance, albeit in a smaller way. It comes after years of Zionist siege of the already impoverished refugees in Gaza, after Israeli-American-Mubarak sponsorship of a bitter split in Palestinian ranks, and after the massacre of 1400 Palestinians in the winter of 2008/2009. It comes in large part as a result of the momentous changes occurring in a revolutionary Arab world and the wider region, because of the decline of American power, and Israel’s increasing isolation. Israel was forced to break its own taboos, not only to deal with Hamas but also to release Palestinian prisoners from Jerusalem and from the lands occupied in 1948.

I was in a caravan in the north of Scotland when the enemy soldier was released. I saw the news on the caravan’s television set, on the BBC and Sky. The soldier was named again and again, his parents were pictured, his fate was pondered with sympathy. The Palestinian hostages, on the other hand, received very little attention, and when they did they tended to be demonised. Over the last five years, the name of the single Israeli prisoner has been burnt by repetition into the Western consciousness. The thousands of Palestinian prisoners have hardly been mentioned. Driving home yesterday, I glimpsed a front page headline in the Times (the once august London paper now owned by Rupert Murdoch, a committed Zionist). Again it named the Israeli prisoner, and reminded the reader of his five years in a ‘dungeon’. The world is full of prisoners – in occupied Palestine, in Syria, in China. Why does the Israeli merit front page treatment?

In such ways the media and the politician class manufacture Western consent to Zionist crimes. They also encourage the Jewish Israeli public in its delusions. Many Israelis are outraged by the deal. They see the Israeli prisoner as an innocent boy abducted by terrorists, and the Palestinian prisoners as bloodthirsty killers who have fought Israel out of sheer evil, inherent anti-Semitism, and an inexplicable propensity to violence. These Israelis do not understand that Palestinians will fight for justice so long as they are denied justice, so long as they are kept cooped in refugee camps while their land is stolen by the masters in an apartheid state. If Western media magnates and politicians are genuinely concerned for the long-term survival of Israeli Jews in Palestine, they should seek to alert them to the reality of the situation. What they’re doing now is like buying whiskey for an alcoholic.

Many of the released hostages never took up arms. Some are elected members of the Palestinian parliament who were illegally abducted by Israel. Those who did take up arms did so for a very good reason – they were resisting ethnic cleansing, apartheid and occupation. This makes them freedom fighters, not terrorists. One of the prisoners, Nael Barghouti, was held hostage for 33 years. Several others have been imprisoned for over thirty years.

Why is it that one Israeli appears to be worth a thousand Palestinians?When it comes to prisoner swaps, the disproportion works in the Palestinians’ favour. When it comes to anything else, it doesn’t. Obviously. One day a Palestinian will be counted the equal of an Israeli Jew. Until then, the resistance would be well advised to do all it can to capture more terrorists to exchange for the remaining five thousand freedom fighters languishing in the Israeli gulag.

In this comment I’ve chosen my words carefully. I’ve called the Palestinian prisoners ‘hostages’ because they’ve been held as leverage for a ransom – the ransom being Palestinian submission. (This isn’t all; they’ve been held also to satisfy the narrative of Israeli innocence and Palestinian criminality). I’ve called the Israeli prisoners ‘terrorists’ because they operated in an organisation which applies physical and psychological violence against civilians for political purposes.

The Millions in Saadallah Al-Jabri Square

Posted by OFF THE WALL

The big news today on regime’s media outlets was the Millions of people who marched to Saadallah Aljabri square in Aleppo to celebrate the Russian and Chinese veto and to declare, yet one more time their love and adoration of the Bashar Al-Assad.

I recall that during the Al-Aasi square anti regime demonstration. Jad, on Syria Comment argued that the square can not fit 500,000 protesters. He eyeballed the area near accurately, and I supported his calculation using the free distance measuring tool on Google Earth. Two of my regime supporting friends have argued that my support of the revolution is unscientific. I have no idea how can one scientifically support the revolution. But I decided today to use a bit more advanced tools to check the Millions in Saadallah Aljabri Square in Aleppo.

I started by using a public domain software called Quantum GIS (Geographic Information System). Using a plugin in the software I connected to Google WMS (Web Mapping Service), which allowed me to view Google Satellite layer and overlay it with other spatial data as well as perform measures not available except for paid Google Earth subscribers. Next was deciding on what would constitute the Pro Regime demonstration area.

As I was moderately generous in the case of Hama, I was excessively so here. I decided to allow people to share space with trees, to sit on fences, and to occupy almost every single square meter in the square as well as in many of its branching streets. For wider streets I decided to go until the second major street after the square. Once the hypothesis was completed. I went on to create a polygon overlay (pretty much a digitizing process), and then to measure the area with another area measuring tool.

The end result is shown below. A larger full size image can be seen when clicking on the image, and it shows that the area calculated is 2.315 hectare. A hectare is 100×100 meters square (10,000 square meters). So the square’s area is basically 23150 square meters (including greenery, trees, structures, and a lot of street space).

I do not recall how many individuals we allowed the Hamwis to have in each square meter, but again, I will be generous and assume 5 people as a first guess (nearly impossible). That would yield an amazing number of 115,750 marchers for the love of Bashar.

Saadallah Al-Jabri Square in Aleppo, Syria, where on the 19th of October, 2011, regime loyalists held one more “Millionic” march. The area within the red polygon, including the tree areas in the south central part of the image is less than 2.5 hectares. That is less than 25000 square meters.

The same approach was used to calculate the place where we Americans (of all origins) like to have our Million people Marches. It is the National Mall in Washington DC. The mall presents a little challenge in digitizing as one has to digitize account for the reflection pool and for few other small water bodies.

But it is doable as seen in the figure below, which shows that even with providing for a security zone for the white house (north of the ellipse park), and with much more conservative discount of tree areas than in the Aleppo case. The mall comes to a 1.037 square kilometer. A square kilometer is 100 hectare (1000m x 1000 m) making 1,000,000 square meters, which is a figure consistent with a much lower and far more realistic density of 1 person/square meter. To play the devil’s advocate recall that every time a group marches on the mall, its adversaries challenge the Million number despite of the full mall.

The National Mall in Washington, DC, where several Million person events were held and caused the mall to be packed. The area within the polygon is slightly more than 1 square kilometer, that is 100 hectares or more than 1 Million square meters. 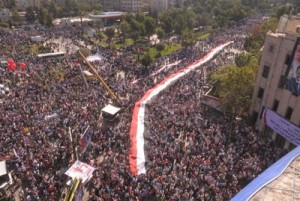 Here is a photo showing how generous I was in estimating the area. Te green area with trees is not occupied, which takes at least a half hectare from the equation. But fine, let us be generous to those who love Bashar.

The analysis herein is very approximate.

If you find the figure of 5 persons/square meter preposterous, you are right. It is. More appropriate is 2 in crowded situations, which would make the Men7ebbaks in today’s MASEERA nearly 46,000, assuming my hypothesis is correct. 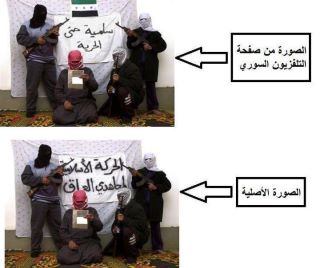 Here is a Bonus. An image was shown on Syrian TV as having been found on a captured anti-regime revolutionist. Notwithstanding the stupidity of the message the image tries to convey. It was a poorly doctored image. While such may be idle nonsense,  it speaks volumes of the regime’s manipulation, desperation, and utter arrogance. The top image, which was published on Syrian TV had a banner saying (peaceful until freedom), the independence flag has a white border around it indicating that it was added to the image. The lower panel image is the original image without the flag and the banner says “the islamic movement of the mujahideen of Iraq”