In Damascus, calm at the eye of the storm 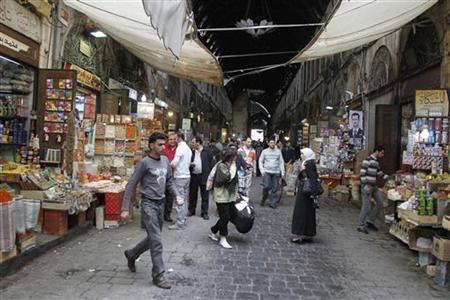 The following story headlined “In Damascus, calm at the eye of the storm” was filed by a writer who has spent several weeks reporting in the Syrian capital during a period in which foreign journalists have been barred from entering the country.

The byline has been withheld to protect the writer and those interviewed for the story. Reuters correspondents were expelled from Syria shortly after unrest began in March.

(Reuters) – As Syria leads daily international headlines with thronging protests in the streets, besieged provincial towns and reports of human rights atrocities, Damascus feels like the eye of the storm, seemingly unaffected by the unrest surrounding it.

The largest demonstrations have taken place in impoverished towns and cities outside the capital, the power base of President Bashar al-Assad and his security forces. Anti-government protests in the city have been small compared to the provinces, rarely rising above a few hundred people.

Residents of Damascus, home to about one Syrian in 10, are wealthier on average than their 20 million fellow citizens. Many have profited since Assad succeeded his late father in 2000 and opened up the economy to substantial foreign investment.

Posters of the president remain in the windows of shop owners who sing accolades for Assad and a tense and eerie calm covers the city as life seems to play out as normal.

In the business district, men in suits and designer sunglasses drink espressos and chat boisterously at swanky coffee shops. In Old Damascus, young couples and veiled old women meander along the cobblestoned alleyways, browsing through ancient souks selling silks and sweets to the ringing chorus of the afternoon prayer, resonating from the gilded Umayyad Mosque.

But these tranquil scenes of stability hide the reality of panic that has built up in Damascus since protests ripped through the country, starting in March under the inspiration of the revolutions inTunisia and Egypt. Look a little closer and the signs of unrest are apparent.

The souks are full of men in leather jackets and beige trousers eyeing the shoppers — the not so secret police, or Mukhabarat, are a constant reminder to Syrians that government spies are ubiquitous, listening in for any dissent.

Activists estimate the number of secret police on the streets has more than doubled since protests started and a longstanding culture of fear of the authorities means Syrians are reluctant to express any revolutionary views openly.

The caffeinated businessmen spend their days drinking coffee instead of working because the country’s economy is grinding to a halt. Faced with uncertainty, foreign investors are pulling out of Syria and unemployment is rising sharply.

The expectation of encroaching turmoil is tangible.

“Most people in Damascus have been able to sit on the fence,” said a Syrian economist who, like everyone interviewed for this story, asked not to be named. “They have always known that the regime is corrupt and brutal, but they care most about their ability to pay rent and feed their children.

“Now the economy has been hit, they can’t do that and the government is losing its support base,” he added.

Once away from the snooping ears of the Mukhabarat and in the privacy of their own shops, traders in Damascus express their growing dissatisfaction with the regime.

“Since the unrest started, I haven’t been able to sell anything,” one souvenir shop owner said over a glass of sweet tea in the back room of his shop.

Tourism, once accounting for up to 15 percent of the entire economy, has shriveled in the past few months.

When demonstrations started, the shop owner blamed the protesters for the dip in business. But it is the vehement response of the Syrian government, he now says, that has ensured so many foreigners are too scared to visit the country.

Human rights groups in Syria report that President Assad’s violent reaction to the protests has left over 1,300 people dead and over 10,000 demonstrators imprisoned. The authorities, blaming radical Islamists with backing from abroad, say more than 200 of its security personnel have been killed.

Foreign journalists have been expelled or barred from entering the country, making it hard to verify reports. Personal accounts from released detainees, including a Reuters correspondent, paint a picture of systematic cruelty in jails.

One activist, who asked to be referred to only as Mohammed, said that protests he has attended in the capital are immediately dispersed by baton-wielding “paid thugs,” who were brought in by security forces on buses. The leather-jacketed secret police, he says, film the protests using mobile phones to use as evidence to later identify demonstrators in prison.

“It is almost impossible gather as the security forces are everywhere in the capital,” Mohammed said. “We will normally wait for a Friday when we can assemble safely in the mosque for prayers to form a large group that provides some protection before we go out.”

But security forces are usually waiting outside, Mohammed says, and demonstrations turn into a mad race to escape the clutches of police.

Former prisoners say they face relentless beatings and humiliating interrogations. “The police strip you naked and give you electric shocks to force you to confess that you are part of an armed gang and not a peaceful protester,” one demonstrator, known as Hamza, said after he was released from detention.

Syrian state media has blamed the unrest on “armed gangs and terrorist groups” but even Assad supporters in Damascus concede that most anti-government demonstrations are peaceful.

“When I was imprisoned, our jailers wouldn’t let us sleep,” Hamza said. “The only people who got any rest were the ones who were beaten so badly that they fell into comas.”

Assad has spent the past 11 years sculpting an image of himself as a reformer willing to listen, in contrast to his father, Hafez al-Assad, who crushed an armed Islamist uprising in the central city of Hama in 1982, killing many thousands.

But as stories of state-endorsed viciousness are whispered in hushed tones across the capital, Damascus residents are starting to question if their current leader is any less vindictive than his father.

“Beneath the cool calm, there is a feeling of change in Damascus,” a Syrian journalist working in the capital said. “People are starting to question if the president is who they thought he was.”

Talking politics has long been taboo in Syria and dissenters say they expect jail time. But as protests grow around the country, activists in Damascus say they have “broken the wall of fear” that prevented them from speaking out against the regime.

The cracks in Assad’s powerhouse are starting to show.

Even in cafes around Damascus, conversations broaching politics can be overheard, something unheard of only a few months ago. Jump into a taxi and the driver will often start the conversation by asking: “What do you think of the protests?”

Questioning Syrian taxi drivers on their political views before the Arab Spring, which began six months ago, was normally met with a frown and a swift change of subject.

“The problem has become so big, that for people to publicly ignore it seems ridiculous,” the Syrian journalist said. “Syrians can speak about the protests even as they walk along the street without seeming too rebellious.”

Many activists have gone further and are openly denouncing the regime on Facebook profiles and Twitter accounts.

“At the start, I was too scared to speak out or attend protests but I now feel I have to do something when I hear about the horrific things the government is doing around the country,” a student at Damascus University said in a busy café, confident that the ambient noise of chatter would drown out her words.

“I know that if I protest, I will get arrested, tortured or even killed as this has happened to some of my friends,” she added quietly. “But the alternative of doing nothing as this man stays in power is worse.”

Long-serving diplomats in Damascus agree that there has been a significant shift of mood in capital. This Friday, as every week, attention will focus on crowds coming out of the city’s mosques.

“So far, the protesters have only be able to assemble in the suburbs of Damascus and are quickly dispersed by the police,” one Western diplomat said, on condition of anonymity.

“But it seems the protesters are now growing in numbers and gathering closer to the city center.”