STAND WITH THE PEOPLE OF EGYPT

We stand with the people of Egypt in their demand for freedom and basic rights, an end to the crackdown and internet blackout, and immediate democratic reform. We call on our governments to join us in our solidarity with the Egyptian people. 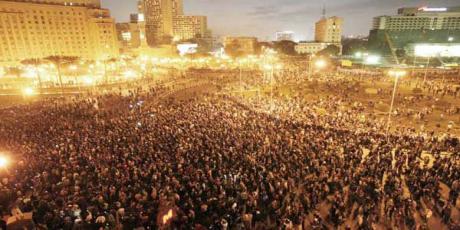 The demonstrations in Egypt could end three decades of repressive rule and bring, at long last, freedom and democracy to Egypt.

The regime is attempting to starve the protest movement of two crucial sources of power: information and solidarity. But despite the internet blackout, Egyptian radios and satellite TVs can still receive broadcasts from across the border — so Avaaz will work with broadcasters whose signals reach inside Egypt to circulate the number signatures on this statement of solidarity, along with messages of support from around the world for Egypt’s people.

Every hour matters. What happens next depends of all of us. Let’s stand with those on the streets and build a deafening outcry against rampant corruption and political repression, and for democratic reform. Sign the statement of solidarity–and spread the word about this campaign!

Massive protests in Egypt have entered their seventh day as tens of thousands pack into Tahrir Square in Cairo. Protesters are vowing to stay in the streets until President Hosni Mubarak resigns. A general strike was called for today, and a “million man march” is being organized for Tuesday. We speak with Democracy Now! senior producer Sharif Abdel Kouddous, who is in Cairo. “This is a popular uprising across all segments of society,” Kouddous says. “People are so fed up with Mubarak, it’s hard to describe. They cursed him, they want him to step down. They will not leave the streets of Cairo, the streets of Egypt, until he does.”

Mike Huckabee was in Jerusalem today on an important junket related to his likely presidential campaign. He used his speech before the Knesset to denounce the Egyptian uprising as a threat to all humankind, warning that “the situation could threaten the world and all those who seek peace and security. The real threat to Israelis is not the bomb but the people behind it, not weapons but the madmen behind them.”

Bibi has essentially muzzled his cabinet ministers, warning them not to make any public statements about the uprising. It is not easy for so-called “only democracy in the Middle East” to say that it wants to keep it that way. So Huckabee was left with a golden opportunity to channel the sentiments of the Israeli government and mainstream Israeli society in address carried to the Israel public as a top story on radio and TV news (I listened to the speech on Israeli national radio today while riding a minibus from Tel Aviv to Jerusalem).

Huckabee’s speech earned praise from Yisrael Beiteinu’s Yulia Shamalov-Berkowitz, who said Huckabee spoke “very Zionistically.” MK Tzipi Hotovely from the governing Likud party echoed Huckabee, declaring that ”the conflict in this region is not a matter of territory, but simply Islam against Judaism, not 1967 borders but the very formation of the state in 1948.”

The language of religious warfare is not exclusive to the Zionist right. MK Binyamin Ben Eliezer, a leader of the shrinking and essentially moribund Labor Party, warned that the Egyptian uprising signals the beginning of renewed conflict. “There will be a new order in the Middle East,” he said recently, noting that he has been in discussions with Mubarak. “It will become more extreme, militant and radical towards Israel from an Islamic point of view. The conclusion that we will draw is that we did not take advantage of the potential for agreements when the Middle East was more moderate.”

Given the statements of Bibi-Barak-Lieberman proxies and supporters like Huckabee, it is not hard to predict Israel’s behavior after Mubarak finally capitulates. The Israeli military-intelligence apparatus and its public relations ancillary are almost certainly crafting a tentative plan to destabilize its neighbor, or simply touching up a dusty, well-worn blueprint. They know that if Zionism is to persevere in the heart of the Middle East, and to continue to besiege and colonize Arabs — Huckabee also called for more settlement building in the West Bank — the political aspirations of Egypt’s people must be crushed, again and again.

Huckabee’s visit marks the opening of what would be the first element of any plan to destabilize Egypt: a rhetorical campaign carried out by sympathetic media and political figures (the American right-wing, heavily influenced by Christian Zionist theology, is a natural ally) to delegitimize whatever comes after Mubarak as a radical Islamist regime that not only threatens Israel, but the Western world as well.