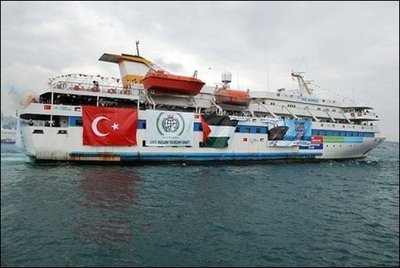 (Stockholm, August 4, 2010) It has been over two months since Israel’s 31 May 2010 deadly assault on the Freedom Flotilla and little to nothing has been done to hold Israel accountable for its savage attack that led to the killing of nine of our colleagues, or to end Israel’s continued violations against the Palestinian people, especially the 1.5 million residents of Gaza. Therefore, we are continuing our global, grassroots effort to stand up to Israel’s ongoing intransigence, including planning our next direct action, plans to enlarge our coalition to include groups from around the world who want to join us, as well as intensify our efforts to mobilize for the new Freedom Flotilla 2.

The world must continue to demand that Israel cooperate with the UN Human Rights Council’s investigation committee to ensure independence, thoroughness, credibility, and justice for the victims.

We have real concerns with the new UN panel tasked by Secretary General Ban Ki Moon to investigate Israel’s raid. as an apparent attempt to downgrade the UN Human Rights Council’s investigation, which Israel has yet to accept. The Secretary General’s new panel will have a very limited mandate of evaluating only current national investigations by Israel and Turkey, and therefore will hardly meet international standards for being impartial, and thorough.

Moreover, the appointment of ex-Colombian President Alvaro Uribe as its vice-chair further corrodes the legitimacy of this UN panel. Not only is the Uribe government on record stating a desire to strengthen Colombia’s military relationship with Israel, but President Uribe’s own human rights record in Columbia should be a matter for investigation as evidenced by the report from the Fellowship of Reconciliation. http://forusa.org/content/report-military-assistance-human-rights-colombia-us-accountability-global-implications.

The United Nations must not be involved in any attempt to whitewash atrocities or to preempt international legal action on behalf of the victims of the flotilla. Israel’s alleged easing of the closure on Gaza has been purely cosmetic, intended only to deflect criticism from its illegal policies. Expanding the list of items permitted into Gaza does not address the most fundamental concern of the people there – freedom of movement. Hundreds of thousands of men, women, and children are still denied the right to travel freely for medical care, educational opportunities, or even to reunite with family members in other parts of the occupied Palestinian territory. What we demand is an immediate and complete lifting of the closure including a lifting of the travel ban as well as the ban on exports from Gaza. We also demand that Israel release, unconditionally, our captured vessels and stolen equipment.

Israel and our respective governments must know that we represent a growing movement of international civilians unwilling to stand idly by while Israel continues to act with impunity — killing, maiming, jailing, stealing, and assaulting the very basics of our common humanity. Israel has not only deliberately created a humanitarian crisis in Gaza, but it has created a crisis of human rights and human dignity in all of Palestine that the world must address.

This is why our flotilla aimed to challenge the very policies that have left Palestinians in need of humanitarian aid, and not just to deliver essential goods to Gaza. It is why, in the coming months, we will send larger and larger flotillas to Gaza.