Do bloggers have any influence in changing authoritarian regimes? Egyptian Blogger, Journalist, and activist Wael Abbas is a thorn in the side of the government and got month a million people read his blog. but is he just gaining celebrity status, or is he making a real difference?

Our beloved Howard Zinn died yesterday of a heart attack in Los Angeles; he was 87. What a huge loss for us as Jews, as progressives, as human beings who care deeply about the world and the people in it.

Zinn was a founding member of JVP’s Advisory Board and he was a tremendous supporter of our work and vision for justice and full equality in Israel and Palestine. He spoke out on behalf of the Shministim, Israel’s young conscientious objectors who waited in jail for refusing to serve the occupation. He spoke frankly about the intolerable subjugation of millions of Palestinians, and how it hurt both peoples. And he stood up for the full humanity of all people everywhere.

He always spoke the truth with humor and and with hope. How lucky we were to share this world and this time with him.

As Zinn wrote in his autobiography, “You Can’t Be Neutral on a Moving Train” (1994), “From the start, my teaching was infused with my own history. I would try to be fair to other points of view, but I wanted more than ‘objectivity’; I wanted students to leave my classes not just better informed, but more prepared to relinquish the safety of silence, more prepared to speak up, to act against injustice wherever they saw it.”

We were all his students, and we at JVP will continue to do our best to live up to his lessons. 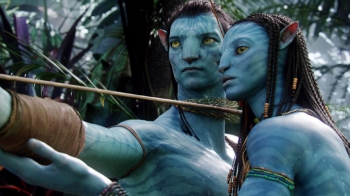 Los Angeles, US, January 28, 2010 (Pal Telegraph) – This week, a screening of “Avatar” erupted into a small ruckus in a U.S. suburb when one moviegoer loudly announced that the Palestinians should learn from this movie what to do to the Jews, causing a commotion and angering others in the audience.

The opinionated moviegoer was Juliano Mer-Khamis. Born in Nazereth to a Jewish mother and Arab father, he is an accomplished actor of many years, a filmmaker as well as a political activist who is very outspoken against the occupation.

Mer-Khamis confirmed the incident and added in the newspaper Maariv: “No one dares to make the real analogy. ‘Avatar’ is one of the bravest films made. It portrays the occupation, but people aren’t making the analogy. Many would like to be like the blue people but don’t understand the meaning. This is why people got angry at the movie theater. It is no secret that I think the Israelis are occupiers and the Palestinians occupied. Israel sits forcefully on lands that belong to others and this is exactly what the movie is talking about.”

Israel has accused Turkish Prime Minister Recep Tayyip Erdogan of inciting “anti-Semitism” by making remarks on the war crimes committed against the Palestinians in the Gaza Strip.

A new report prepared by the foreign ministry in Tel Aviv charges that although Erdogan has stresses that anti-Semitism is “a crime against humanity,” he “indirectly incites and encourages” it in Turkey, the Israeli daily Haaretz reported.

“In our estimate, ever since his party took power, Erdogan has conducted an ongoing process of … fashioning a negative view of Israel in Turkish public opinion,” through endless talks of Palestinian suffering, repeatedly accusing Israel of war crimes and even “anti-Semitic expressions and incitement,” read the report.

The seven-page report written by the Center for Political Research has already been distributed to Israeli embassies and consulates abroad.

“For Erdogan and some of those around him,” the report claimed, “there is no distinction between ‘Israeli’ and ‘Jewish,’ and therefore, [their] anti-Israel fervor and criticism become anti-Jewish.”

“Turkey today, under the leadership of the AKP [Erdogan’s Justice and Development Party], is different from the Turkey with which Israel forged a strategic relationship in the early 1990s,” the report concluded.

Relations between Israel and Turkey began to deteriorate after Erdogan publicly slammed Israel over its late 2008 incursion into Gaza and charged the regime with committing “barbarian” acts against the Palestinian civilians.