3CAIRO: A report issued by the Egyptian Cabinet’s Information Center revealed the delayed age of marriage for women in Egyptian society by approximately one and a half years when comparing statistics from 1992 and 2008. It said the average age of marriage rose from 19.2-years-old in 1992 to 20.6-years-old in 2008, and ascribed this to the increase of the burdens of life and the cost of marriage.

The report was issued under the title “Late Age of Marriage: Is it a problem that needs a solution?” It considered that the entry of women into the labor market has led to a later age of marriage and a rising proportion of females who have never married among those women over 30-years-old and older to 6.3 percent of employed women versus 2.9 percent for non-workers. This also increased when considering the ratio between women with a degree higher than a secondary education to 8.8 percent versus 2.4 percent in educational levels at a lower position.

It also pointed out that the average age at marriage for males was about 29-years-old in 2008 compared to 24-years-old for women.

The report identified the reasons for late marriage age, most notably the high marriage expenses, which constitute the biggest obstacle, as confirmed by 61 percent of youth, and the crisis of finding proper housing by 52 percent as well as the lack of suitable job opportunities by 30 percent.

About 40,000 bodies have already been buried in mass graves [AFP]

Relief workers are still struggling to help thousands of people affected by a earthquake in Haiti, amid difficulties in distributing relief supplies to those who need it most.

International relief organisations and teams from the United Nations are finding it difficult to distribute tons of supplies from the airport near Port-au-Prince, the Haitian capital that was devastated by Tuesday’s quake.

Haiti’s government says that at least 50,000 people have died as a result of the magntiude 7.0 quake.

Sebastian Walker, Al Jazeera’s correspondent in Port-au-Prince, said that while 200 tons of aid was stacked up at the airport, getting relief supplies to those in desperate need has been extremely problematic.

“This comes down to the complex issue of who is in charge here. The US military has a great deal of control over the number of flights that are landing here,” he said.

“We heard that a UN flight carrying aid equipment had to be diverted because the US was landing its own aircraft there. The question of just who makes the decision over how to distribute the aid seems to be what is holding up the supplies.

“At this point, there are thousands camped out in the streets. People here are singing religious songs to try to help get them through the night. These people have been sitting out here for days now, and they say that they have not received the food and aid that ready to be delivered.”

Lorries have been trying to collect the bodies that have been visible on the streets across Port-au-Prince for burial in mass graves outside the city.

If the casualty figures are accurate, Tuesday’s quake would be one of the 10 deadliest on record.

About 40,000 bodies have already been buried, while the bodies of another 2,000 victims have been incinerated at one of Port-au-Prince’s rubbish dumps.

Thousands more people are believed to be under the rubble of the buildings that were toppled in the quake.

Thousands of people are now leaving Port-au-Prince in order to find help. The United Nations has said that many are heading in an easterly direction in hope of eventually crossing into the Dominican Republic.

Quake survivors are also heading north, where destruction from the quake is not as severe, according to satellite images.

However, international aid is still some way from reaching these areas and the arrival of thousands of refugees is likely to make the situation worse.

People are also making their way south to the city of Jacmel, which lies about 80km from the capital.

The UN has said that up to 90 per cent of the buildings in Leogane, a town to the west of Port-au-Prince, had been damaged.

“According to the local police, between 5,000 to 10,000 people have been killed [in Leogane] and most bodies are still in the collapsed buildings,” Elisabeth Byrs, a spokeswoman for the UN Office for the Co-ordination of Humanitarian Affairs, said.

Between 40 and 50 per cent of the towns of Carrefour and Gressier were also destroyed, the UN assessment team said.

“Search and rescue teams are in these areas,” Byrs said, stressing that there was an “urgent need for medical care”.

Barack Obama, the US president, said the earthquake had inflicted “heart-breaking” losses and pledged that Washington would do what it takes to save lives and get the country back on its feet.

“The scale of the devastation is extraordinary … and the losses are heartbreaking,” he said.

Obama also urged patience with the relief operation, saying there would be “many difficult days ahead”.

“President Bush and Clinton will help the American people to do their part, because responding to disaster is the work of all of us”, Obama said, speaking in the White House Rose Garden on Saturday.

Bush told journalists that the best way to help Haiti was “just send your cash”, and announced a website to help fund-raising – the Clinton-Bush Haiti Fund.

In an attempt to address some of the problems facing aid delivery, the US was given on Friday “senior airfield authority” of Haiti’s main airport under an agreement between the Haitian government and the US state department.

Lieutenant-General Philip Breedlove, the US air force deputy chief of staff for operations, plans and requirements, said that the agreement would be in effect until Monday.

The agreement means the US will “schedule and control” flights in and out of the airport, deciding what planes can land and in what order.

Aid flights have been arriving at the airport faster than ground crews can unload them, prompting aviation authorities to restrict non-military flights for fear that jets would run out of fuel while waiting to land.

The USS Carl Vinson, with 19 helicopters onboard, also arrived off Haiti on Friday, opening a second significant channel to deliver help.

The helicopters immediately began ferrying water and other supplies into Haiti.

The US plans to send 10,000 US troops to Haiti to help distribute aid and prevent potential rioting among survivors, Mike Mullen, the chairman of the US joint chiefs of staff, said.

For many years now the American foreign policy has been characterized by the strong tie between the United States and Israel. Does the United States in fact keep Israel on its feet? And how long will it continue to do so? In March 2006 the American political scientists John Mearsheimer (University of Chicago) and Steve Walt (Harvard) published the controversial article ‘The Israel Lobby and US foreign policy’. In it they state that it is not, or no longer, expedient for the US to support and protect present-day Israel. The documentary sheds light on both parties involved in the discussion: those who wish to maintain the strong tie between the US and Israel, and those who were critical of it and not infrequently became ‘victims’ of the lobby. The question arises to what extend the pro-Israel lobby ultimately determines the military and political importance of Israel itself. Colonel Lawrence Wilkerson (Colin Powell’s former chief-of-staff) explains how the lobby’s influence affects the decision-making structure in the White House.
With political scientist John Mearsheimer, neocon Richard Perle, lobby organization AIPAC, televangelist John Hagee, historian Tony Judt, Human Rights Watch director Kenneth Roth, colonel Lawrence Wilkerson, Democrat Earl Hilliard, Israeli peace negotiator Daniel Levy and investigative journalist Michael Massing. 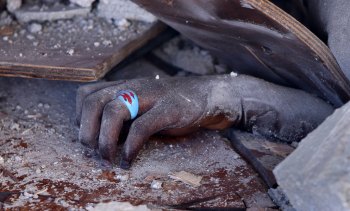 You want to hear about chutzpah? You want to hear about sheer gravity-defying audacity? Well, ladies and gentlemen, comrades and friends, prepare to catch your lower jaw. Forget Limbaugh’s racist anxieties. Forget about Pat Robertson drooling about Haiti’s ‘pact with the devil’. He’s a senile old bigot, and his sick provocations are familiar by now. This is the Heritage Foundation on the Haiti earthquake, which is estimated to have killed 100,000 people:

Amidst the Suffering, Crisis in Haiti Offers Opportunities to the U.S.

In addition to providing immediate humanitarian assistance, the U.S. response to the tragic earthquake in Haiti earthquake offers opportunities to re-shape Haiti’s long-dysfunctional government and economy as well as to improve the public image of the United States in the region…

While on the ground in Haiti, the U.S. military can also interrupt the nightly flights of cocaine to Haiti and the Dominican Republic from the Venezuelan coast and counter the ongoing efforts of Venezuelan President Hugo Chavez to destabilize the island of Hispaniola. This U.S. military presence, which should also include a large contingent of U.S. Coast Guard assets, can also prevent any large-scale movement by Haitians to take to the sea in rickety watercraft to try to enter the U.S. illegally.