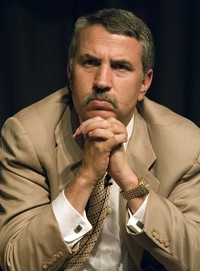 In a recent article in the New York Times, the American Jewish journalist Thomas Friedman blamed the so-called Arab-Islamic “Narrative” for all the troubles surrounding US-Muslim relations-from the 9-11 terrorist events in 2001 to the recent killing of 13 American soldiers in Texas by American-born and American-bred Nidal Malik Hasan.

Friedman suggested that Muslims all over the world ought to show gratitude to the US for helping them in places like Kosovo, Bosnia, Darfur, Somalia, Lebanon, Kurdistan, post-earthquake Pakistan, post-Tsunami Indonesia, Iraq and Afghanistan. True to his style, he carefully ignored the killing of hundreds of thousands of mostly innocent people in the context of American intervention in these countries.

Friedman also suggested that the American military crusades against the Muslim Middle East were meant as a message of deterrence and primarily to destroy two tyrannical regimes-The Taliban and the Baathists.