From the Free Gaza “boat people”

(Doha, 22 June 2009) In three days, the Free Gaza movement sails 240 miles from Cyprus to Gaza, its eighth mission to break Israel’s draconian siege on 1.5 million Palestinians there. In the holds of the FREE GAZA and the SPIRIT OF HUMANITY will be tons of cement, and suitcases full of toys, crayons and coloring books for the children, all items banned by Israel’s government.

Two of the organizers, Huwaida Arraf and Greta Berlin, as well as the Honorable Cynthia McKinney, former U.S. Congresswoman from Georgia, held a press conference yesterday in Doha, Qatar. All three called on the world to recognize Palestinian human and civil rights…rights that have been denied for 61 years.

“People in Gaza are being made to live in subhuman conditions. Children are dying, and governments are silent. It is important to continue sending boats to Gaza to challenge the criminal blockade enforced by the Israeli military,” said Ms. Arraf.

The group emphasized that what they are taking is only a token of what the people of Gaza need. They are hoping to buy a cargo boat , to bring in larger amounts of building supplies via the sea route they aim to open. They ask for the financial support of people around the world to purchase this ship.

Speaking to Al Jazeera and eight other news organizations, Ms Arraf emphasized, “International donors pledged over $4bn to rebuild Gaza, yet none of them are doing a thing about the fact that Israel allows no building supplies into the territory. So 36 of us from 16 countries are leaving on Thursday to tell the world to do something.”

When asked what guarantees the group has received from the Israeli government, both Berlin and Arraf frowned. “We do not seek permission from or coordinate with the Israeli authorities. Israel has grossly abused its authority as an occupying power, daily violating the human rights of Palestinians, and imposing collective punishment on them. It is past time for the international community to stop abetting Israel’s illegal closure policy.” stated Ms. Arraf.

The group intends to go at least three times over the summer; June 25th, July 14th, and August 16th, near the anniversary of the first successful voyage.

The Free Gaza Movement, a human rights group, sent two boats to Gaza in August 2008. These were the first international boats to land in the port in 41 years. Since August, four more voyages were successful, taking Parliamentarians, human rights workers, and other dignitaries to witness the effects of Israel’s draconian policies on the civilians of Gaza. On December 30, their boat, the DIGNITY was rammed three times while 90 nautical miles out, in international waters, on its way to deliver emergency medical supplies to the people of Gaza, while they were under the infamous attack by Israel. Contact them at http://www.freegaza.org. For photos, please check http://www.flickr.com/photos/29205195@N02/

There Are Some Lines You Just Don’t Cross 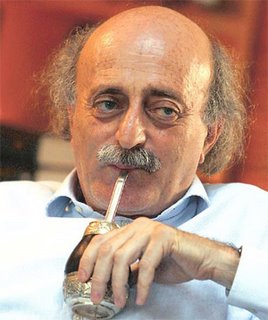 Remember Walid Jumblatt, the leader of Lebanon’s Progressive Socialist Party who made a big splash four years ago when he began raving about the wonders of the Bush Doctrine? Probably not, to the relief of many a neocon. He was an embarrassing ally for the warbots even back then, but now he’s gone and done the unforgivable:

A surprise reconciliation between the leaders of Hizbullah and the Progressive Socialist Party was followed on Friday by Walid Jumblatt’s re-directing his rhetoric south, to Palestine, and warning of the “absolute extremism” of the Israeli government. “I call on all of our people in Palestine to reject sectarian and non-sectarian violence and cling to their Arabism and Palestinian national project, to confront Zionist projects that promise to be more dangerous and fiercer in the coming phase,” Jumblatt said in a statement.

The PSP leader said the Israeli government had no interest in a peace settlement and “insisted on absolute extremism” in its current policies.

I suspect we won’t be seeing any more sympathetic profiles of this “insightful interpreter of the fluctuations in Middle Eastern politics” any time soon.