Obama and the Pirates 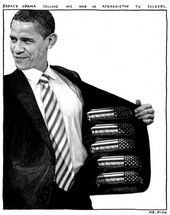 The administration of President Barack Obama is certainly owning the successful rescue of Americans held hostage by pirates in the seas off Somalia, holding it up as the epitome of what our rulers would like us to believe is a pragmatic, tough-minded, and decisive administration, and touting it as the Obamaites first overseas military success. Yet, barely a few hours after the dramatic rescue was made – complete with a display of sharp-shooting skills surpassed by none, and a tale of derring-do that featured a self-sacrificial captain and a crew determined to see him safely home – the problem with this sort of grandstanding was and is all too clear: the pirates are back, and with a vengeance, hijacking four more ships in 24 hours.