On Gaza and Hamas : Ali Abunimah

In light of the most recent Israeli attacks on Gaza, Ali Abunimah speaks at a University of Chicago panel held on January 8, 2008, which included Norman G. Finkelstein and John J. Mearsheimer.

In light of the most recent Israeli attacks on Gaza, Ali Abunimah speaks at a University of Chicago panel held on January 8, 2008, which included Norman G. Finkelstein and John J. Mearsheimer. 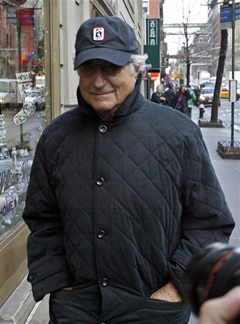 The Obama administration, hoping to find investors to buy $1 trillion worth of so-called “toxic” assets from U.S. financial institutions, has turned to confessed swindler Bernie Madoff to mastermind the sales campaign.

While White House officials acknowledged that joining forces with the jail-bound scam artist was likely to raise some eyebrows, privately they are hoping that when it comes to selling bad assets to investors, the “Madoff magic” will carry the day.

Under the unusual arrangement, Mr. Madoff will be temporarily sprung from his prison cell and permitted to have meetings with prospective investors to sell them on American financial institutions’ $1 trillion worth of bad assets, accompanied by a phalanx of armed guards.

“The guards wanted to bring dogs along to chase Madoff if he tries to make a run for it, but we felt that would undercut his credibility with investors,” Mr. Emanuel said.

The chief of staff added that having Mr. Madoff spearhead the sale of toxic assets would free up Mr. Obama for more pressing matters, “like appearing on Jimmy Kimmel Live.”

In other economic news, Treasury Secretary Timothy Geithner said he would raise much-needed capital for the U.S. Treasury by accepting billboard advertising on his forehead.
SOURCE