Gaza and the Palestinian Authority

The March to War: Today the Gaza Strip, Tomorrow Lebanon…

In the Middle East, it is widely believed that the war against Gaza is an extension of the 2006 war against Lebanon. Without question, the war in the Gaza Strip is a part of the same conflict.

Moreover, since the Israeli defeat in 2006, Tel Aviv and Washington have not abandoned their design to turn Lebanon into a client state.

Prime Minister Ehud Olmert told France’s President Nicolas Sarkozy, in so many words, during his visit to Tel Aviv in early January that today Israel was attacking Hamas in the Gaza Strip and that tomorrow it would be fighting Hezbollah in Lebanon.[1]

Dante’s Hell is Alive and Well in Gaza

By e-mail from Free Gaza

Dante Alighieri could never have imagined circles as hellish as the wards of the damned in Jabalia’s hospitals. The laws of divine justice are turned on their head around here: the more innocent the victim, the less likely that they’ll be spared martyrdom through bombing. At Kamal Odwan and Al Auda hospitals, the ceramic tiles in the first aid units are always shiny. The cleaners are permanently busy wiping away the blood dripping copiously from the stretchers constantly carrying in the massacred bodies. 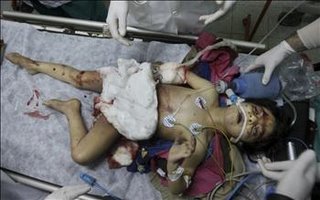 Iyad Mutawwaq was walking in the street when a bomb tore open a building not far from him. He and other passers-by rushed over to try and bring some aid when a second bomb was dropped on the same building. It killed a father of 9, two brothers and another passer-by who had rushed over to help. The same story could be told over ten, or one hundred times. The perfect terrorist technique is being immaculately carried out by the Israeli army. You drop a bomb, wait for the first-aiders, then drop another bomb on the wounded and the first-aiders.

In Iyad’s eyes, those were American bombs, but they also carry the stamp of Mubarrack, the Egyptian dictator who rivals Olmert here in Gaza when it comes to provoking hatred. Behind Iyad’s bed, an elderly man with both his arms in plasters is lying staring at the ceiling, and I’m told he’s lost everything: his family and his home. He stares at the cracks in the falling plaster, as if seeking an answer to the sheer destruction of his existence.

Khaled worked in Israel for 25 years, prior to the first Intifada. In recognition, Tel Aviv hasn’t even granted him a pension, only a series of missiles from land and air onto his house. He suffers from shrapnel wounds all over his body. I ask him where he plans to go after he’s been discharged from hospital. He says he’ll join his family, out in the streets. Not unlike Khaled’s, many families don’t know where to find shelter.

The most fortunate were offered hospitality by relatives and acquaintances, but can you really say that one hundred people crammed into two apartments counting three rooms each is really a life? Two bombs were dropped onto Ahmed Jaber’s home and though his family fled, for some of them it was too late. A third explosion buried 7 of his relatives under the rubble, including two children aged 8 and 9 – his neighbour’s children.

He says: “They made us leap back in time, back to 1948. This is their punishment for our attachment to our country. They can tear my arms and legs off from my body, but they won’t make me leave my land.” A doctor takes me aside and tells me that Ahmed’s 7-year-old daughter, or what was left of her, was just brought in inside a tiny cardboard box. They don’t have the heart to tell him and make his already precarious health condition any worse. In the evening they took the phone away from Iyad as well, to prevent him from receiving any more bad news. A tank had hit his sister’s house full in the middle, beheading her in the process.

In the end, our Free Gaza Movement boat never got to the port in Gaza. About 100 miles from their designated destination, in international waters, they were intercepted by 4 Israeli war ships poised to open fire and kill its cargo of doctors, nurses and human rights activists. No one must dare to obstruct the massacre of civilians now in full swing for the last 3 weeks.

East of Jabalia, in front of the border, eyewitnesses speak of numerous decaying bodies in the streets. Their rotting meat is being eaten by the dogs. There are also hundreds of people unable to go anywhere, many of whom are injured. The ambulances simply cannot get anywhere near, with the trigger-happy snipers all over the place. Palestinians are sick of languishing in the midst of this general indifference, and many even accuse the international Red Cross and the UN of not doing enough, including not fulfilling their duties, nor risking their lives to save hundreds. We ISMers will thus equip ourselves with some stretchers and proceed on foot to the areas where humanity has surpassed all boundaries, eclipsing itself in the process.

The heavy-bottomed settlers sitting in the pristine lounges of armchair politics harp on about military strategies against Hamas, while we’re being literally massacred out here. They bomb hospitals, and yet there are some who still champion Israel’s right to self-defense. In any self-styled civilised country, self-defense is proportionate to the attack.

In these 20 days we’ve counted 1,075 dead Palestinians, 85% of whom were civilians, and over 5,000 injured, of whom half were under 18 years old. 303 children were atrociously massacred. It’s equivalent to saying that for Israel, butchering at least 250 Palestinians is a justified blood-bath in avenging each dead civilian on its own side. How can this lop-sided reaction not take one back to some of modern European history’s darkest pages?

Let’s get straight to the point: are we seriously talking about self-defense? For journalists like Marco Travaglio, Piero Ostellino, Pierluigi Battista and Angelo Panebianco, who harp on with the refrain of Hamas having full responsibility for this genocide as well as for breaking the truce between Israel and Palestine, I would like to remind them of the United Nation’s position on the matter. Professor Richard Falk, special rapporteur for human rights with the United Nations, has clearly expressed his views: it was in fact Israel that broken the truce in November, by blatantly exterminating 17 Palestinians. In the same month zero Israeli victims had been recorded, zero in October and likewise in the previous month, as well as the one prior to it. We were also recently reminded of this by Nobel prize winner and ex US President Jimmy Carter. It really is a crying shame that a journalist like Travaglio, who’s earned our admiration as a proud upholder of freedom of the press, is now sporting an IDF helmet and entertaining the masses on TV while amusing himself with the pastime most in vogue at the moment – infant-shooting in Gaza.

As I tap on my keyboard in the Ramattan press agency office, all the Palestinian reporters around me are wearing bullet-proof vests and helmets. They haven’t come straight from riding in a tank – they’re simply sitting in front of their computers. Two floors above, the Reuters offices were recently struck by a rocket, which seriously injured two. Almost all the floors in the building are empty at the moment, and only the most heroic of journalists are still around. The story of this hell must somehow continue to be told. And yet earlier this week, the Israeli army had assured Reuters it wouldn’t need to evacuate, as staying in their offices would be safe. This morning many casualties were also caused by the bombing of the United Nations building, built among others with money from the Italian government. Berlusconi, where are you?

John Ging, chief of the UNRWA, UN agency for Palestinian refugees and eye witness, clearly spoke of white phosphorous bombs. In the Tal el Hawa neighbourhood in Gaza city, a whole wing of Al Quds hospital is presently in flames, and Leila, an ISM colleague is also trapped inside it along with forty doctors and nurses, and one hundred patients. She describes these last dramatic hours to us via phone. A tank stands in front of the hospital. There are snipers everywhere, ready to shoot at anything that moves. All around is destruction. At night, from their windows, they could observe a building going on fire after having been struck by a bomb. They heard the cries of whole families with children, imploring help. They were impotent to help as they watched the bodies devoured by the flames, running into the street and then be reduced to ashes. Hell has switched places and come to the centre of Gaza, and we are the damned designated by an inhuman hatred.