Seaside break in Syria proves too much for young Palestinians

I can empathize with them but with this attitude in life we would never be happy since many good things come to an end. The poor kids are in depression and do we understand them ! May be it will prompt some government to get the whole families out of there.

AL TANF, Syria, June 30 (UNHCR) – It seemed like a good idea. Take a group of Palestinian children to the seaside to help them escape the monotony and hardship of their lives in limbo on the arid Iraq-Syria border.

But it all proved a bit too much for most of the children taken to the Syrian city of Tartus on the Mediterranean Sea earlier this month from the Al Tanf camp, where they and their families have lived for months after fleeing their homes in the violence-plagued Iraqi capital of Baghdad.

The sudden freedom of movement, the cool sea breezes, the abundant food and drink and the other laughing kids showed these nine children what they were missing and what they would miss once again when they returned to Al Tanf at the end of their week’s holiday.

June 30, 2008: The year is 1908, and it’s just after seven in the morning. A man is sitting on the front porch of a trading post at Vanavara in Siberia. Little does he know, in a few moments, he will be hurled from his chair and the heat will be so intense he will feel as though his shirt is on fire.

That’s how the Tunguska event felt 40 miles from ground zero.

Today, June 30, 2008, is the 100th anniversary of that ferocious impact near the Podkamennaya Tunguska River in remote Siberia–and after 100 years, scientists are still talking about it.

“If you want to start a conversation with anyone in the asteroid business all you have to say is Tunguska,” says Don Yeomans, manager of the Near-Earth Object Office at NASA’s Jet Propulsion Laboratory. “It is the only entry of a large meteoroid we have in the modern era with first-hand accounts.” 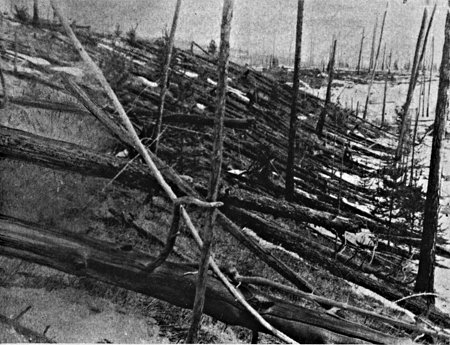 While the impact occurred in ’08, the first scientific expedition to the area would have to wait for 19 years. In 1921, Leonid Kulik, the chief curator for the meteorite collection of the St. Petersburg museum led an expedition to Tunguska. But the harsh conditions of the Siberian outback thwarted his team’s attempt to reach the area of the blast. In 1927, a new expedition, again lead by Kulik, reached its goal.

“At first, the locals were reluctant to tell Kulik about the event,” said Yeomans. “They believed the blast was a visitation by the god Ogdy, who had cursed the area by smashing trees and killing animals.”

A link to NEO
Another article about the event