Popcorn and Champagne – The Trial of Tareq Aziz

Getcha popcorn ready! The Green Zone Puppet Theatre in Baghdad is putting on a new show, The Trial of Tareq Aziz. 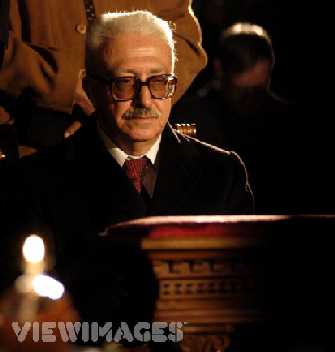 The charges against the former deputy premier of Iraq – when Iraq was still free and a country – are related to the execution of 42 Baghdad merchants in 1992. At the time Iraq was under the genocidal embargo imposed by the United States and its British vassal through the United Nations.

Six weeks ago, President Bush signed a secret finding authorizing a covert offensive against the Iranian regime that, according to those familiar with its contents, “unprecedented in its scope.”

Bush’s secret directive covers actions across a huge geographic area – from Lebanon to Afghanistan – but is also far more sweeping in the type of actions permitted under its guidelines – up to and including the assassination of targeted officials. This widened scope clears the way, for example, for full support for the military arm of Mujahedin-e Khalq, the cultish Iranian opposition group, despite its enduring position on the State Department’s list of terrorist groups.

Similarly, covert funds can now flow without restriction to Jundullah, or “army of god,” the militant Sunni group in Iranian Baluchistan – just across the Afghan border — whose leader was featured not long ago on Dan Rather Reports cutting his brother in law’s throat.

Other elements that will benefit from U.S. largesse and advice include Iranian Kurdish nationalists, as well the Ahwazi arabs of south west Iran. Further afield, operations against Iran’s Hezbollah allies in Lebanon will be stepped up, along with efforts to destabilize the Syrian regime.

READ ON
My comment : This is why I do not believe the israeli “peace” ouvertures are genuine